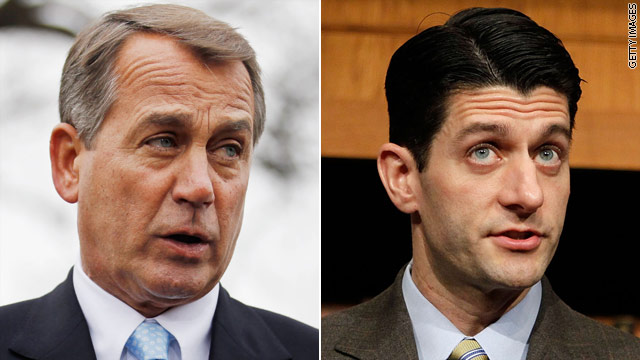 Washington (CNN) - The chairman of the House Budget Committee said Sunday that if early reports are accurate, President Obama is "abdicating leadership" on the debt crisis by proposing a budget that will continue to raise the national debt.

The plan Obama will release Monday will cut the deficit by $1.1 trillion over 10 years and include a five-year freeze on non-security discretionary spending and cuts to education grants, according to his budget director, Jacob Lew.

Ryan declined to say the president's budget would be "dead on arrival" in Congress, adding that he needs to see the full text before making a final determination.

But if "he (Obama) is talking about coming and having new spending, so-called investments, that is not where we are going," Ryan said.

The Ohio Republican sent a letter to Obama on Sunday – signed by 150 economists – urging him to reduce spending and reduce the deficit.

"We're broke," Boehner said. "What's really dangerous is if we continue to do nothing and allow the status quo to stay in place."

He defended the cuts included in the plan House Republicans unveiled Friday and said there is "no limit to the amount of money that our members want to cut."

The new GOP plan would cut government programs including scholarships, family planning, school counseling and Teach for America, and if enacted, fund the government for the final seven months of the fiscal year once the current continuing resolution expires in March. The GOP plan was met with criticism from Democrats who said the spending cuts were too steep.

As for the Republican budget proposal, Boehner said the plan will include cuts to entitlement programs, which the president's budget will not address.

- CNN's Dana Bash and Jeanne Sahadi contributed to this report