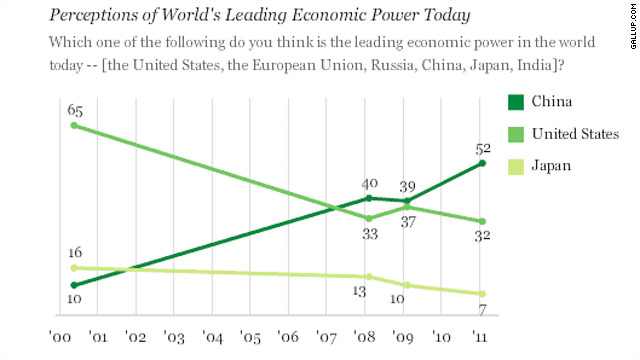 Washington (CNN) - Americans now overwhelmingly believe China is the leading economy in the world, according to a new poll, a significant change from two years ago when Americans viewed the U.S. economy and that of China on roughly equal ground.

A Gallup poll released Monday indicates that 52 percent of Americans now name China as the leading world economic power, compared to 32 percent who say the United States is tops when it comes to the economy. When the same questioned was asked in 2009, 39 percent said China while 37 percent named the United States.

The United State's GDP continues to outstrip that of China, though Americans' views may be influenced by China's significant economic growth over the last several years compared to a contraction in the U.S. economy during the same period.

"Few would argue that China's rocketing economic growth looms as a formidable challenge to the United States' global economic leadership," Gallup says. "However, the majority of Americans believe the U.S. has already lost the challenge, and relatively few are confident that the situation will be reversed in 20 years."

The poll surveyed 1,015 Americans by telephone between February 2-5 and carries a sampling error of plus or minus four percentage points.