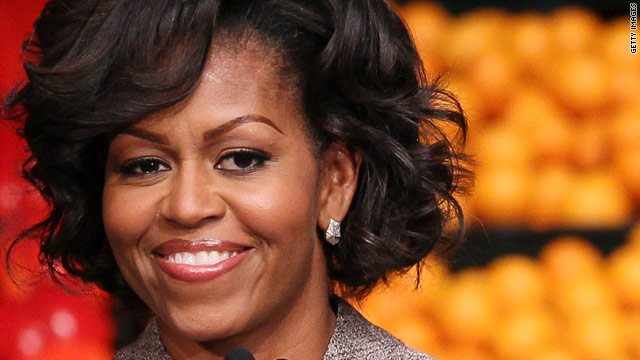 Washington (CNN) - First lady Michelle Obama is often praised for her taut arms and athletic physique. So why is a cartoon depicting her with fat cheeks, a double-chin and chowing down a platter full of hamburgers?

The cartoon appears on Biggovernment.com. The man behind the site is blogger and conservative firebrand Andrew Breitbart.

In the cartoon, the first lady is shown saying: "I've stepped up my efforts to control America?s eating habits by telling restaurants to lower portion sizes and fat content." The drawing shows a plump Mrs. Obama working her way through a plate full of hamburgers and fries.

In contrast, President Obama thinly drawn at her side- is shown eating what appears to be light vegetables from a near-empty plate.

"Michelle, I want to get re-elected. What you're doing is only going to annoy a lot of people," the cartoon depicts the president as saying.

"Shut up and pass the bacon!" the first lady shoots back in the drawing.

The real Mrs. Obama is pushing a nationwide initiative to decrease childhood obesity. A website devoted to the effort lays out how the waistlines of American children have been growing at alarming rates over the last 30 years.

Some conservatives see the campaign as an effort by Mrs. Obama at using her public platform to tell Americans what to eat.

Last year, Sarah Palin told conservative radio host Laura Ingraham: "What [Michelle Obama] is telling us is she cannot trust parents to make decisions for their own children, for their own families in what we should eat."

More recently, Palin let out a slam in a recent episode of her reality show, "Sarah Palin's Alaska." While making s'mores at one point, the former Alaska governor said the marshmallow and chocolate treat is "in honor of Michelle Obama, who said the other day we should not have dessert."

Meanwhile, there's been attention given to some of the first couple's food choices. The president and First Lady are known for eating hamburgers, even publicly visiting burger chains like Five Guys. And the menu at the recent White House Super Bowl party had some people talking.

Mrs. Obama addressed the chatter about the menu, a few days later, on NBC's Today Show.

Mrs. Obama said: "Yeah. I've always talked about balance in this campaign. I mean, we're really trying to make some changes." She added: "So I do talk openly about my obsession with French fries because I want people to understand the changes that we have to make in our lives are not whole scale changes. Many of the changes for kids are small things, things like adding fruits and vegetables and getting our kids moving and taking–putting more water in the diet."

Reader comments posted after the cartoon are telling.

"I just figured out how MooShelle plans to control Americas eating habits. She plans on eating everything herself," one person posted. "It's really proof for me that we've gotten so hateful toward each other that the Obamas could do nothing that you would agree with. They could kiss a baby and you would find something wrong with it," is the comment from another poster.

In a recent USA Today interview Mrs. Obama denied that she is trying to tell Americans what to eat.