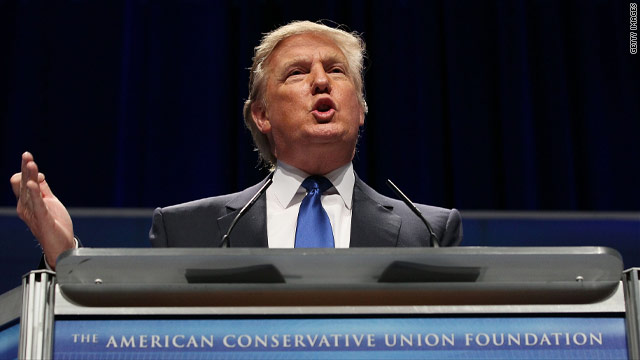 Washington (CNN) - Rep. Ron Paul is taking a dig at Donald Trump, days after the business mogul told thousands of attendees at the Conservative Political Action Conference that the crowd-favorite Paul "cannot get elected."

"I've won eleven times, so I don't know whether he has earned the right to criticize somebody for not winning an election when I don't know how many elections he's won so far himself," Paul said Monday on CNN's American Morning.

Paul's comments came in response to Trump's speech Thursday before the large gathering of conservative activists in Washington that this year is viewed as an early proving ground for Republican presidential candidates. Trump, who claims he is considering a presidential bid himself, ignited boos from the largely pro-Paul crowd when he question the Texan Republicans ability to get elected.

"Considering the shape the United States, we need a competitive person, a highly competent person" to run for president, Trump also said.

On CNN Monday, the 11-term congressman said he has long been viewed as an underdog.

"I run in a very conservative, Bible-belt district, and I challenged everything George Bush did, practically," said Paul. "And people say 'You can't win with that. You're too much of a strict constitutionalist. You want such little government. You actually want to balance the budget. You can't win. It just won't work.'"

Paul was the winner of the CPAC straw poll with 30 percent of the vote. Former presidential candidate Mitt Romney, viewed by many as a more viable choice than Paul, came in second with 23 percent.