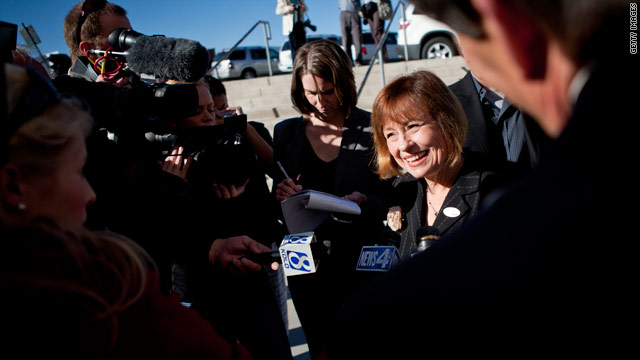 (CNN) - Sharron Angle, the long-shot Tea Party-backed candidate who almost defeated Senate Majority Leady Harry Reid in last year's midterm elections, is hitting the road this week and it looks like another election may be on her mind.

Angle will be making stops in two early and important 2012 primary states this month for viewings of a Christian movie entitled "The Genesis Code," which is described by the producers as a film that "reconciles the Biblical account of Genesis with the scientific account of the origins of the universe."

The film will premiere in South Carolina on Friday and in New Hampshire on February 25. Both states hold some of the first primaries of the 2012 presidential campaign and are critical to mounting a successful bid for the White House. Further stoking 2012 speculation, Angle attended the film's debut in Iowa last month.

The former Nevada state legislator has not ruled out a bid for the country's highest office. When asked about her political aspirations at last week's Conservative Political Action Conference, Angle told CNN: "I think I have lots of options and I'm exploring them all."