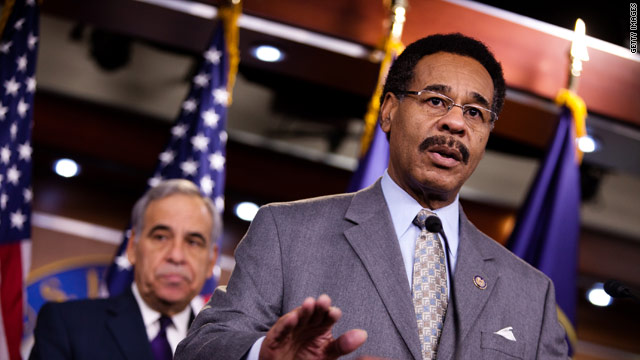 Black Caucus chairman: if Obama were still a member, he would oppose his own budget

Washington (CNN) - The Chairman of the Congressional Black Caucus said Tuesday that if President Obama were still part of the group of African American legislators he wouldn't like his own budget.

"I think the proposed budget from the president is not the budget we would present," said Missouri Democratic Rep. Emanuel Cleaver during a press conference on Capitol Hill about the president's budget and proposed GOP spending cuts.

Pointing to another leader of the black caucus, Cleaver added, "if the president was still a member of the CBC, he would be standing next to Barbara Lee criticizing the budget that was presented today, and so we have an obligation do that, to oppose things that we think will impact negatively our constituents."

Cleaver said he thought Obama was trying "a balanced approach" to making spending cuts, but said he disagreed with that strategy. "I tend to not to think that we ought to be fair. I think that gets us in trouble because the poorest people should not have to pay the same price as for example the Wall Street barons who got us in trouble," Cleaver said.

Cleaver said the CBC's opposition to portions of the president's budget is "not going without notice at the White House" and said the group plans to "push back in areas that we find trouble with." The group is scheduled to meet with White House staff and also planned a session with the Budget Director Jacob Lew to discuss their concerns.

Although he was critical of the Obama's budget, the CBC Chairman noted that this was the beginning of the budget season and said he thought there was plenty of time to work with the White House. Cleaver mentioned that he already spoke with the president a week ago about the value of the community block grant program that helps cities. President Obama's budget cuts the program by 7.5 percent, or $300 million for 2012.

While Cleaver was open about his criticisms of the President's budget, he also hit Republicans who have been saying the President "punted" by not addressing the massive deficit. Noting he was a former football player, Cleaver said, "If they believed the President punted, pick up the ball."