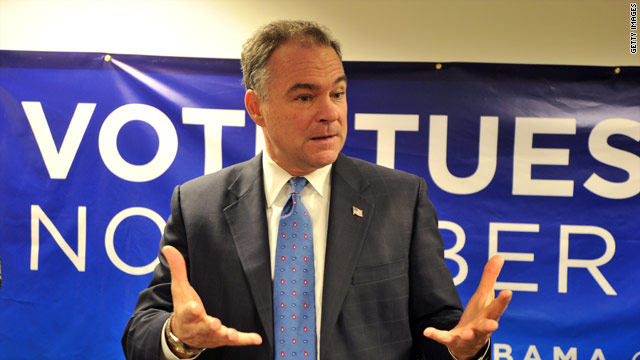 Washington (CNN) - Democratic National Committee Chairman Tim Kaine said Tuesday he plans to talk with President Obama in the next day or two about a possible Senate bid in Virginia.

Kaine told the Richmond Times-Dispatch he is "flattered" by speculation that he might run for the Senate seat, which will be open in 2012 following Sen. Jim Webb's announcement last week that he will retire after just one term.

Webb's decision left Virginia Democrats scrambling to find a strong candidate to run in his place. Former Sen. George Allen is hoping to recapture his seat, which he lost to Webb in 2006, but must first survive a primary campaign against at least one conservative rival, Richmond-area Tea Party activist Jamie Radtke.

Kaine is by far the most prominent name on the roster of possible Democratic candidates - a list that also includes former Reps. Tom Perriello and Rick Boucher - but several state Democratic insiders have told CNN in recent days that Kaine is reluctant to run for the seat.

The DNC Chairman will attend Saturday's Jefferson-Jackson Dinner in Richmond, the Democratic Party of Virginia's biggest annual fundraiser. State Democrats, though, counseled against reading too much into the appearance, since Kaine is the commonwealth's most recent Democratic governor and still resides in Richmond.