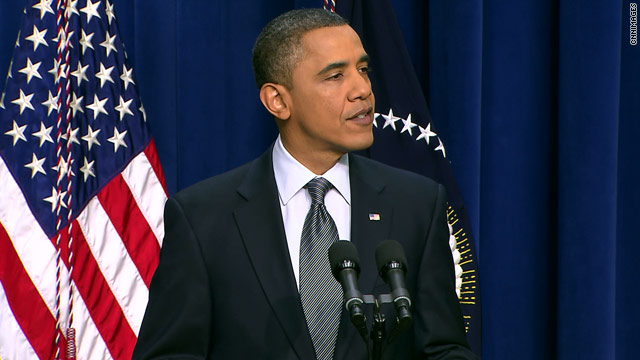 The CNN Political and White House teams are bringing you the latest developments and reactions from President Obama’s news conference. Please continually refresh this page for the latest updates (CTRL-R).

12:05 p.m. ET - @LisaDCNN OBAMA LIKES CRITICISM more: Says it's a good sign that the GOP called out his lack of entitlement reform – it shows they agree it's needed.

12:01 p.m. ET - @KateBolduanCNN Big question now - How long will the American pple have to wait for that confirmation? #CNN

12:01 p.m. ET - @KateBolduanCNN Obama final thought at presser: What the american pple want is confirmation that this place (Washington) can work.......

11:59 a.m. ET - Total questions: Ten. Total times mentioning the scalpel and machete metaphor: Three. Maybe this one will officially replace "driving the car into the ditch" from last year's midterm campaign as his favorite repeated line.

11:57 a.m. ET - QUESTION 10: New York Times' Jackie Calmes asks why the president isn't inviting Republicans to the negotiating table right now. He said he had conversations with Republicans and the Democratic leadership. "I did before the budget was released and I will afterwards." I expect all sides will have to do a little posturing on television, speak to their constituencies. He wants quiet, toned-down conversation...

11:55: a.m. ET - Obama says in response to Fox's question: "I do think it's important when thinking about corporate tax and individual tax reform, that we keep taxes as low as possible but we also have to acknowledge that as families have to pay for what they buy. The government has to pay for what we buy." He's been saying this for months now.

The president wants to have an adult conversation where everyone says what is important and how to pay for it. There will be disagreements. He admits he'll have to compromise on things and hopefully others will say the same.

11:51 a.m. ET - QUESTION 9: Mike Emanuel of Fox News asks, "The number one concern for many Americans is jobs. If you look at the budget there are tax hikes for energy, higher income people… but do you worry about the impact on jobs?"

11:49 a.m. ET - Responding to Ed Henry's question, his message to protesters – the US supports their aspirations to speak their mind. What happens in each of these countries will be determined by the citizens in these countries. But POTUS said need make sure transitions don't degenerate into chaos and violence. That's "not just good for us" but good for those countries.

11:46 a.m. ET - QUESTION 8: CNN's Ed Henry asks what's his message is to protesters – taste freedom but only if it will bring stability to U.S. interests?

11:45 a.m. ET - On getting Davis freed, the president said: "If our diplomats are in another country, they are not subject to that country's prosecution. We do that. We hope that Pakistan will do that too…We'll continue to work with the Pakistani government to get him released." Obama also says we're not callous about the loss of life but there is a broader principle at stake.

11:41 a.m. ET - ABC's Jake Tapper asks about getting US embassy worker Raymond Davis freed from Pakistan. He's being held for the murders of two Pakistanis.

11:40 a.m. ET - QUESTION 7: ABC's Jake Tapper asks if he's willing work with GOP on a continuing resolution (funding bill) to avoid government shutdown. The president says his goal is to work with Republicans on continuing resolution – funding vital government functions this year. He says I want to work with everybody to get the issue resolved. He doesn't want to make series of "symbolic cuts" that could endanger the recovery. Uses the scalpel not a machete line again

11:39 a.m. ET - The president says someone is writing a book about the 10 letters from the public he reads every day. He spoke to the author yesterday. Says he gets frustrated as he wants to help everybody but he can't.

11:38 a.m. ET - Obama says he doesn't need to be making calls for Rahm for his Chicago mayoral race. But on the budget cuts, he says, "Now we're in a budget crunch. Costs have skyrocketed. "If we continue on this pace, we're just going to have to chop off eligibility…. Instead we said, how are we going to trim?" Also says, "My goal is to make sure that we're looking after the vulnerable, the disabled, the seniors, making sure education is serving our kids.. and doing that in a way that is sustainable."

11:34 a.m. ET - There goes the scalpel metaphor again – this time about trimming the Pell Grant program. Better than chopping off eligibility he says. Who's administering a tourniquet?

11:31 a.m. ET - EEOB's South Court Auditorium where this presser is taking place is not so presidential. A podium and flags might do the job in a tight shot, but the blue drape and bland room doesn't match the Rose Garden or East Room

11:30 a.m. ET - QUESTION 5: April Ryan of American Urban Radio Networks asks about proposed budget cuts to community grants, pell grants in a time of recession but also asks POTUS, "Have you been placing calls for your friend Rahm Emanuel?"

11:25 a.m. ET - Obama says, to get things done, it will require "everybody having a serious conversation. So that we are all getting into the boat and the same time so it doesn't tip over."

11:22 a.m. ET - It turns out that Fiscal Commission was really just a "framework for a conversation."

11:21 a.m. ET - Obama avoids the questions by saying that we're just impatient about every thing… saying that even the Egypt revolution taking 18 days, why did it take so long?

11:20 a.m. ET - QUESTION 4: NBC's Chuck Todd asks, "What was the point of the fiscal commission? Why has their work been shelved?"

11:19 a.m. ET - @KateBolduanCNN Obama on budget: First step is stabilizing our current situation. Second is taking on some of the long term drivers (medicare/medicaid)

11:16 a.m. ET - The president continues... answers the Iran question by saying, "You can't maintain power through coercion…. There has to be consent." Especially when people can connect by picking up a smart phone and connecting through social media."

11:14 a.m. ET - QUESTION 2: Reuters reporter asks about what Obama's message is to the Iranian people. The president repeats some of what he just said in previous answer about Egypt. AP's Feller also asked about uprising in Egypt's impact in the region. Obama said it's very important all the protests we're seeing throughout region that "governments respond to protests peacefully."

11:10 a.m. ET - Further into his answer: Obama said that ultimately the government will need to rein in Medicare and Medicaid costs. He said he also believes "we should strengthen Social Security for future generations." But bipartisan cooperation is required, the president said.

11:05 a.m. ET - Obama said that "just like every family in America," the government has to live within its means while investing in the future. Obama said that's what his budget accomplishes.

11:01 a.m. ET - @JohnKingCNN 11a POTUS news conference. An effort to frame the spending/budget/jobs debate, and to talk #egypt, #iran and more. #cnn #fb