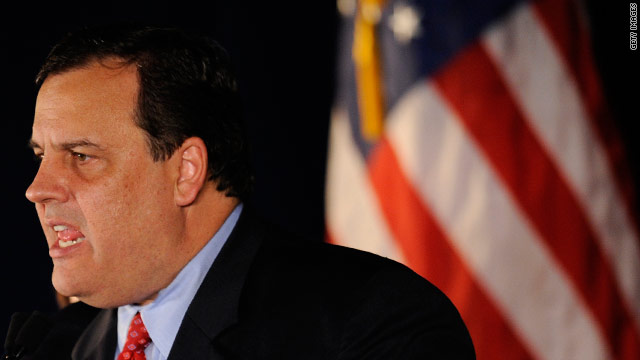 In high-profile speech, Christie calls for Social Security retirement age to be raised

Washington (CNN) - New Jersey Gov. Chris Christie traveled to the nation's capital Wednesday with a message for Democrats and Republicans alike: the country is "teetering on the edge of disaster" unless the government's looming fiscal problems are confronted head-on.

"It's put up or shut up time," Christie declared in a speech at the conservative American Enterprise Institute in downtown Washington.

Christie called on President Obama and members of Congress to stop tip-toeing around the need to reform entitlement spending and said bluntly that the retirement age for Social Security must be raised or the program risks becoming insolvent by 2037.

"There, I just said it!" Christie joked, tweaking other politicians who tend to avoid specifics when discussing Social Security reform. "I'm still standing here, and I did not vaporize."

Christie, who was elected in 2009, boasted about bringing "a new approach and new discipline" to Trenton, where he has famously butted heads with legislators over spending cuts and clashed with teacher's unions over school reform.

The governor said voters appreciate his blunt talk. "People are ready to hear the truth," he said.

He demanded that leaders in Washington address the "big things" - specifically fixing Social Security, Medicare and Medicaid - instead of putting them aside for someone else to deal with.

Christie has insisted over and over again that he has no plans to run for the White House in 2012 despite having a loyal following among Republicans who admire his brash style and efforts to trim a bloated budget in New Jersey.

But Christie, addressing a standing-room only crowd peppered with reporters from major newspapers and television networks, sounded very much like a politician ramping up his national profile.

"In Jersey they call me impatient," he said. "Ladies and gentleman, I think it's time for some impatience in America."

After his speech, Christie took several questions from reporters and audience members. Not surprisingly, Christie was asked right off the bat if he would consider running for president.

Christie admitted that there is room for him to run - "I am not stupid," he noted. "I see the opportunity. I see it." - but he said that's not reason enough to take the plunge.

"You have to believe in your heart and in your mind that you are ready and I don't believe that in myself right now," he said. "So that's why I said I won't run and I can't imagine that changing."

"The issue of budget management deserves a serious discussion, not merely a set of slick 'tough guy' sound bites," O'Malley said in a statement. "And as the nation's governors are set to convene in Washington next week, it's an issue we look forward to debating."