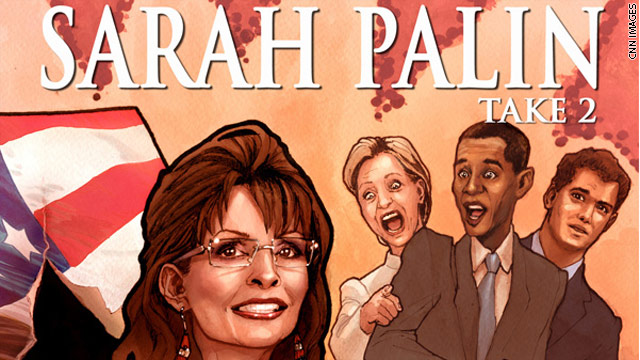 On Wednesday, a Washington-state comic book company released their sequel to an illustrated biography on the former Alaska Governor.

"Female Force: Sarah Palin Take 2" is available in comic book stores and on Amazon.com. It begins with Palin stepping down as governor in 2009.

The 32-page issue will follow her foray into reality TV and possible entry into the 2012 presidential race, said Darren Davis, President of Bluewater Productions, the comic book's publisher. It sells for $3.99.

"The Sarah Palin world exploded this year," Davis said. "She's such a polarizing figure. This one wasn't hard to do."

Bluewater's first Palin comic was published in 2008 and went through four printings, Davis said. The sequel will have an initial printing of 15,000 copies, he said.

Some of the company's previous comics in the "Female Force" series have chronicled the adventures of Michelle Obama, Hilary Clinton and Betty White.

On Wednesday, Bluewater also published a comic book on the life of conservative commentator Bill O'Reilly.