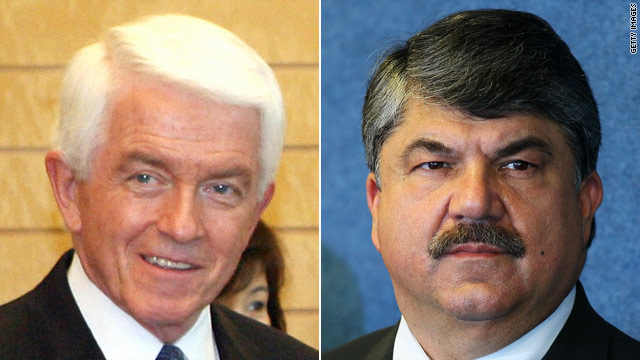 But on Wednesday AFL-CIO President Richard Trumka and Chamber of Commerce President Thomas Donohue made for a political odd couple in their first joint public appearance. The two were testifying before the Senate Environment and Public Works Committee in favor of more infrastructure spending, and the irony was not lost on either man.

"The fact that Mr. Donohue and I appear before you today does not mean that hell has frozen over - or unicorns are now roaming the land. The fact is, while there are many policy areas where we have sharp differences, we both realize that our country needs to step up our Investment in America for business as well as working Americans to succeed," Trumka said.

"Rich and I may seem like the oddest couple since Felix and Oscar, but the truth is that business and labor have to decided to set aside certain differences" to achieve goals, including infrastructure improvements and immigration, Donohue said referencing the characters from the play and television show "The Odd Couple."

"We may not be Facebook friends, but we can occasionally find some common course," added Donohue.

After the panel's chairman Sen. Barbara Boxer, D-California, asked the two men who should go first since they are both presidents, neither one volunteered. So Boxer suggested a coin toss. She asked Donohue what he preferred, and he said tails, according to an AFL-CIO spokeswoman. Boxer turned to a committee aide who flipped the coin. It came up tails. Trumka then patted Donohue on the back.

In their statements both men pushed for more federal spending to help spur infrastructure building – helping to creates jobs, which the unions will like, and aiding businesses to grow, which the Chamber will like.

Strong federal investment in our transportation system has never been more important to support the economy and create and sustain good jobs for U.S. workers," said Trumka.

"I say it is time to astound the world again with our ingenuity, ambition, and dreams. Sufficient, smart, and judicious investment in infrastructure is where it all begins. The sooner we start, the better. We don't have a moment to lose," Donohue said.

Previously, the two men did issue a joint statement right after the President's January State of the Union address applauding him for aiming to create more jobs.