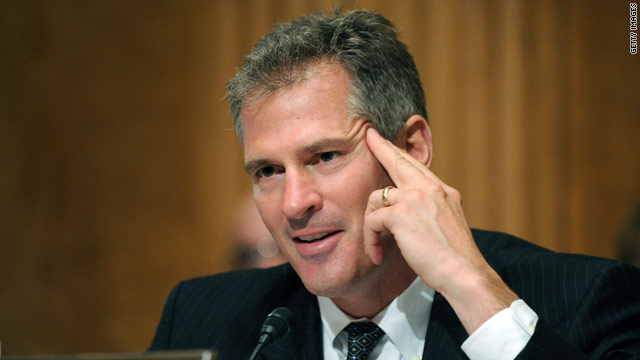 Washington (CNN) - Sen. Scott Brown, R-Massachusetts, said that he was sexually abused by a camp counselor at the age of 10, and physically and psychologically abused by his stepfathers, in an interview scheduled to air Sunday on CBS.

"Fortunately, nothing was ever fully consummated, so to speak," Brown said of the sexual abuse. "But it was certainly, back then, very traumatic."

"He said, 'If you tell anybody, you know, I'll kill you. You know, I will make sure that no one believes you,'" Brown said the abuser threatened him, in a clip of the interview released Wednesday by CBS. "And that's the biggest thing. When people find people like me at that young, vulnerable age, who are basically lost, the thing that they have over you is they make you believe that no one will believe you."

Brown said he had kept the sexual abuse a secret, even from his mother and wife.

"My mom will read about it for the first time," Brown said. "My wife has read about it. No, no, I haven't told anybody. That's what happens when you are a victim: you're embarrassed, you're hurt."

The 60 Minutes interview airs on the eve of the release of Brown's new book, "Against All Odds: My Life of Hardship, Fast Breaks, and Second Chances."

Brown issued a statement a short time after CBS released the clip emphasizing that the abuse is just one part of his "life story."

"My book is about overcoming obstacles," Brown said in the statement. "The physical and sexual abuse is in my book. It's a part of my life, but it certainly isn't the only part of my life story which I tell. My book will be out on Monday and I hope people will read it and be inspired by its message."

The Massachusetts senator's office emphasized that as a state legislator he had always been an advocate for victims of sexual abuse.

Brown, a freshman senator, moved into the national spotlight in January 2010 after defying the odds and winning a special election to fill the remaining three years of the late Sen. Edward Kennedy's term. Brown's victory was not only symbolic because Republicans took over the seat held by Kennedy, a Democrat known throughout the nation as the "liberal lion." But his win also gave Republicans 41 votes in the Senate, a powerful tool that allowed the GOP the ability to maintain a filibuster against Democratic legislative initiatives.

Brown is seeking re-election to his own six-year term in 2012.