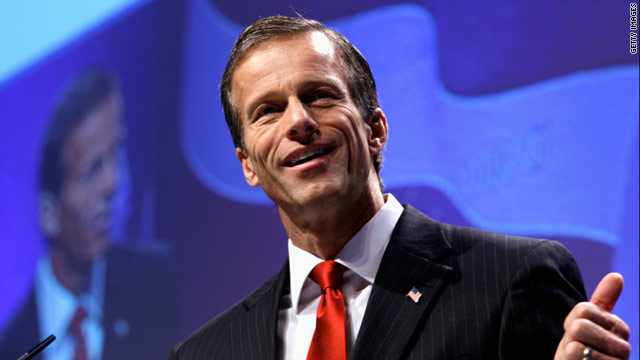 Washington (CNN) - South Dakota Sen. John Thune appears to be still very much flirting with the possibility of running for president despite overwhelming speculation he is more likely to instead set his sights on increasing his rank among the Senate Republican leadership.

In an interview with the National Review posted online Wednesday, Thune suggested he might be the best GOP candidate to matchup against President Obama.

"As Republican voters think about who they want to nominate, it really ought to come down to which candidate can defeat President Obama," he said. "It really comes down to match-ups. Sometimes you have a very talented group of athletes. But at the end of the day, it comes down to who matches up best against your opponent.

"When it comes to age and energy, all those sorts of things, I think it could be a great match-up," added Thune.

The comments come four days after Thune was warmly greeted at the Conservative Political Action Conference, the annual gathering of conservative political activists in Washington, DC that this year served as an early cattle call for likely GOP presidential candidates.

The two-term senator took the stage Friday to chants of 'Run John, Run," but ultimately gave the crowd few hints into his political future.

Thune has said he will decide by the end of February whether to run.