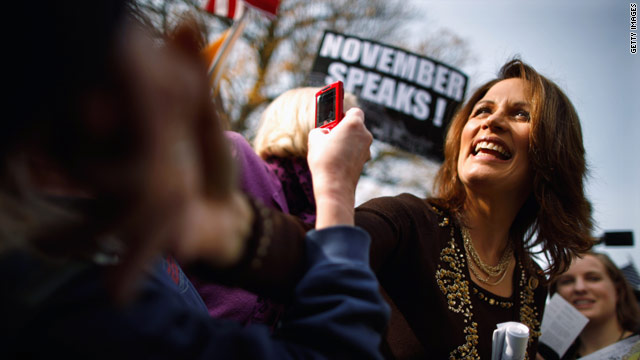 Washington (CNN) - Rep. Michele Bachmann Thursday noticeably sidestepped the long-standing issue of President Obama's citizenship, saying "it's not for me to state" whether the president is or is not an American citizen.

"That isn't for me to state, that's for the president to state," the Republican congresswoman from Minnesota and Tea Party favorite said on ABC's "Good Morning America" when asked about lingering doubts among some Americans that the president was not born in the United States.

"When the president makes his statements, I think they need to stand for their own," Bachmann also said when asked if she believed the president's own contentions that he was, in fact, born in the United States.

"We should take the president at his word," Bachmann said. Then asked if she'd be willing to flat out state the president is a citizen and Christian, the congresswoman said she was more focused on economic concerns.

The comments come days after House Speaker John Boehner addressed the issue in a way some Democrats thought was not definitive enough.

"It's not my job to tell the American people what to think," he said on NBC's "Meet The Press" Sunday. "The state of Hawaii has said he was born there. That's good enough for me…the president says he's a Christian. I accept him at his word."

Bachmann, who also told ABC she has not made a final decision on a presidential bid, heads to the first-in-the-nation primary state of New Hampshire next month to attend a fund-raiser for New Hampshire's Republican Party.