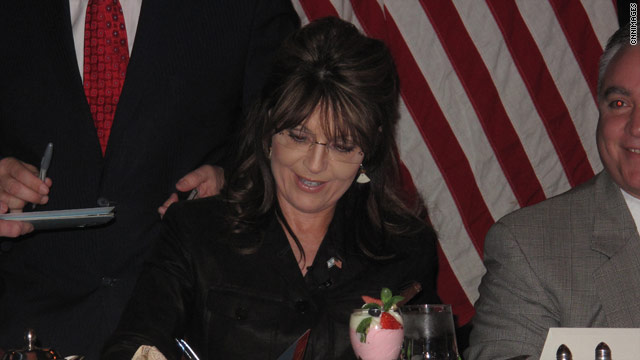 Woodbury, New York (CNN) - Sarah Palin addressed a variety of issues Thursday at a gathering of business officials in Long Island, New York including her 2012 plans, first lady Michelle Obama, President Obama's proposed budget, the crisis in Egypt, and her feelings on the media.

Here's a snapshot of what she had to say:

When asked who else she might envision at the top of the GOP ticket Palin responded, "No one is more qualified to multi-tasking and doing all the things you need to do as a President than a woman."

She then began reciting from her resume, listing her experience as a mayor and running for Vice President.

"What I would look for in terms of character is someone who's been on the front lines, who understands how to administer, how to lead a team, how to run a business."

On Michelle Obama:
"No wonder Michelle Obama is telling people to breast feed their babies, because the price of milk is rising so high."

She then warned the dozens of reporters at her question and answer event, "That better not be the takeaway here."

"If they're radical enough to have already spoken against liberties and freedom is this good for Egypt and their freedoms?" she also said.

Palin also criticized the Obama Administration for appearing to flip-flop on Egypt.

"There was so much confusion about where our administration was," Palin said. "I won't condemn them for adding to the confusion, but the American public does deserve to know whose side we're on."

On the media:
Asked her about a recent Gallup Poll indicating more than 50 percent of those surveyed have a negative opinion of her, Palin responded, "In a lot of those polls I get my butt kicked."

"The poll you're referring to was taken after the Tucson tragedy. I don't think I ever went through more negative press than after Tucson," she said.

"How else does the public know you except through the press? When the press reports things that have really misrepresented my record as a council member, mayor… and what you stand for and who your family is," Palin continued, pointing to her reliance on Twitter and Facebook for public communications.

"I can't rely on a liberal-leaning press to do that for you. That's why social media will be so important."

On the president's budget proposal:
President Obama's budget plan will take the country "on the road to ruin," Palin said.

"What the people of America are saying is, 'enough is enough no more status quo we don't want to continue deficit spending.'"