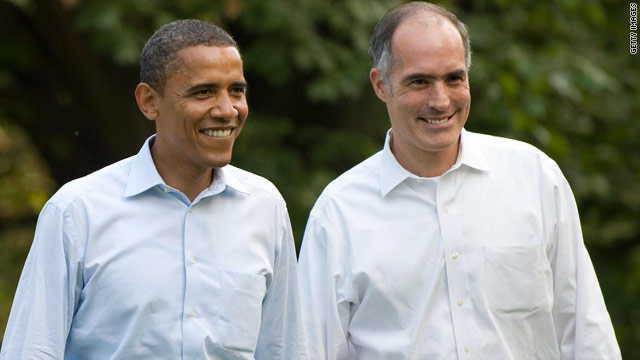 Poll: Obama and Casey on the rise in Pennsylvania

Washington (CNN) - Does Sen. Bob Casey Jr. deserve to be re-elected next year?

According to a new poll of voters in Pennsylvania, 46 percent say yes.

A Quinnipiac University survey released Thursday morning also indicates that President Barack Obama's approval rating in the Keystone state, a crucial battleground in the 2012 race for the White House, is at its highest level since the summer of 2009.

By a 46 to 28 percent margin, people questioned in the poll say Casey, a first term Democratic senator, deserves another term in office. And by a 45 to 35 percent margin they say they'd vote for Casey against whomever the Republican nominee is in 2012.

The survey indicates that 44 percent of Pennsylvania voters approve of the job Casey's doing in office, with 24 percent saying they disapprove and just over three in ten undecided. Casey's approval rating is up 5 points from December.

"Although Sen. Bob Casey, the son of a former governor with the same name, was a statewide elected official for eight years as state auditor general and has served four years as senator, it is somewhat surprising that 31 percent of Pennsylvania voters haven't decided whether they think he is doing a good job," says Peter Brown, assistant director of the Quinnipiac University Polling Institute. "That's not that much lower than the 39 percent who don't have an opinion about the Commonwealth's other senator, Pat Toomey, who has been in office just six weeks."

According to the poll, the president's approval rating in Pennsylvania stands at 51 percent, with 44 percent saying they disapprove of the job Obama's doing in the White House.

That 51 percent figure is the highest in Quinnpiac polling in Pennsylvania since the president had a 56 percent approval rating in July 2009.

"President Barack Obama's approval numbers are up substantially since December 16, when the Commonwealth's voters split 44 – 43 percent on his job approval," adds Brown.

The poll indicates the rise is partially fueled by a 9-point jump since December in Obama's approval rating among independent voters.

But by a 48 to 42 percent margin, Pennsylvania voters say Congress should repeal the president's new health care reform law.

According to the survey, by a 45 to 39 percent advantage, Keystone state voters say they would cast a ballot to re-elect Obama next year, and by a narrower 48 to 45 percent margin, they say he deserves another term in office.

Obama won the state by 10 points over Sen. John McCain in the 2008 presidential election.

The Quinnipiac University poll was conducted February 8-14, with 1,366 registered voters in Pennsylvania questioned by telephone. The survey's overall sampling error is plus or minus 2.7 percentage points.