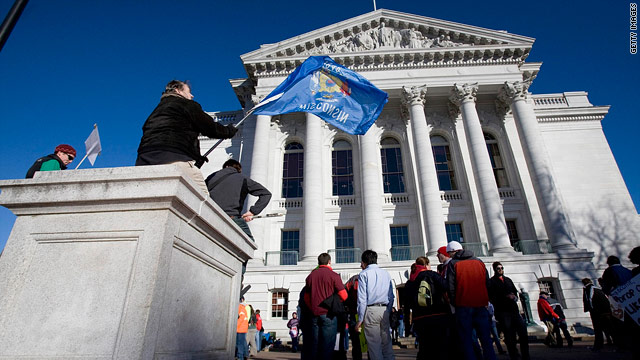 What both states have in common are defiant responses to legislative measures that would limit collective bargaining rights for state workers.

Strickland sent an e-mail to supporters on Saturday, urging them to protest Ohio Senate Bill 5, a proposal sponsored by state Sen. Shannon Jones that would eliminate collective bargaining rights for state workers. Stating a need to "defeat Senate Bill 5 and the rest of our opponents' anti-middle class agenda," Strickland asked supporters to protest because "this fight isn't just about police, firefighters, teachers and other public employees … it's about whether or not we will be a state that stands up for the middle class."

Meanwhile, Republican Gov. Scott Walker of Wisconsin proposed legislation in his state to eliminate the right of unions to have dues deducted from the paychecks of their members and require collective bargaining units to conduct annual votes to maintain certification, a process criticized as being costly. The budget-slashing bill would also require state workers to cover more of their health care premiums and pension contributions. The proposed measures have drawn ire from state workers and have attracted crowds of protesters to the Wisconsin capitol, who were joined by Feingold on Friday.

Support for Wisconsinites has also spread to the west coast, with a rallying cry from Danny Thompson, a representative of the AFL-CIO, who encouraged members to attend rallies in Carson City and Las Vegas in the coming week.

"It has never been more important than now to stand in solidarity with Wisconsin workers and workers around the country – including Nevada workers - who are under attack from politicians bent on destroying the labor movement," Thompson wrote in an e-mail.

"Show your support for worker's rights, and express your outrage at the attacks being leveled against them."