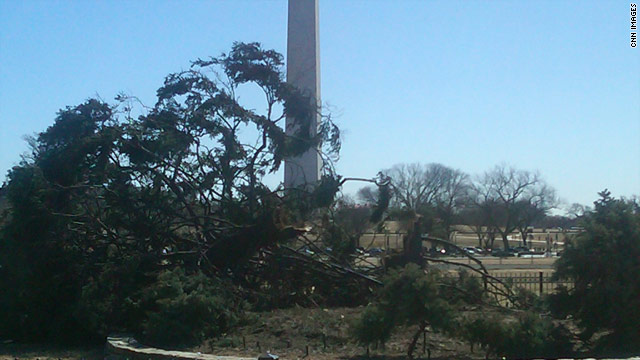 Sustained winds at 25 miles per hour and wind gusts up to 50 miles per hour swept through the area and snapped the tree 4 feet above the ground, the National Park Service said in a statement.

By 5:30 p.m., less than seven hours later, the tree was reduced to mulch by work crews.

The tree was trimmed over the holidays with green-hued LED lights and snowflake ornaments in an area called "The Ellipse" directly between the south lawn of the White House and the Washington Monument.

The first family lighted the tree, a tradition going back 87 years, on December 9, 2010, as blues legend BB King, Maroon 5, and others performed at the ceremony. It stayed lit each evening until New Year's Day.

According to the National Park Service, decorations are provided by sponsoring organizations in from every state and are placed in a "protective plastic globe" to protect them from bad weather.

The Park Service has identified a successor tree and will announce this spring when it will be brought to the Ellipse, the statement said.

The spruce had been in its current location for more than 32 years. It came from the Myers family farm outside of York, Pennsylvania, the Park Service said.

"The tree had been planted and watered by the Myers' grandchildren. When the tree was 6 years old it had been planted in the Myers' front yard as a Mother's Day gift for Mrs. Myers. After discussions with the NPS horticulturists, the Myers agreed to let the tree go to become the nation's Christmas tree."