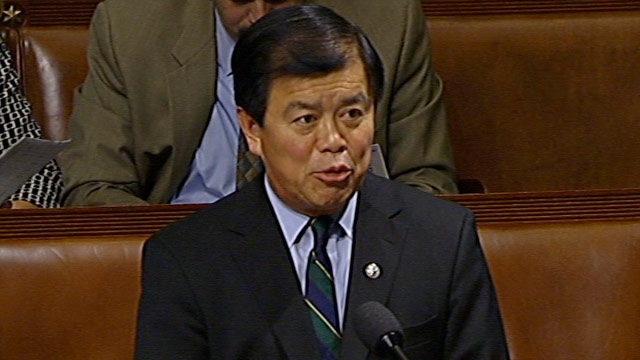 "I freely admit that it was an intense campaign, and I was not always at my best with staff or constituents. For all those moments, I wish I'd been better and I apologize," he said.

And he revealed a need for medical attention, saying, "To address my behavior and its consequences, I sought professional medical care and continue to obtain professional help from my doctor."

Wu continued, "Some of my stress was derived from a very tough campaign, but I was also dealing with raising two children alone and the death of my father.

"I fully acknowledge that I could have dealt with these difficult circumstances better, and I remain focused on being a good father to my children and a strong representative for the people of Oregon."

Wu separated from his wife in December 2009. His father passed away on November 27 of natural causes the next year.

His statement came after a report in a major newspaper that senior members of his staff were concerned about the congressman's mental health shortly before the critical 2010 midterm elections.

The Oregonian newspaper, citing anonymous sources within Wu's congressional office and his campaign,
reported Friday that senior staffers were so concerned about what they described as Wu's erratic behavior on the campaign trail and in private that they urged him to be admitted to a hospital for psychiatric treatment.

The newspaper said, according to its sources, that Wu resisted the plea, which resulted in a stalemate that "essentially shut down" the campaign before election day.

Wu's statement Friday did not specifically address questions about his mental health.

He was re-elected in November to his seventh term.