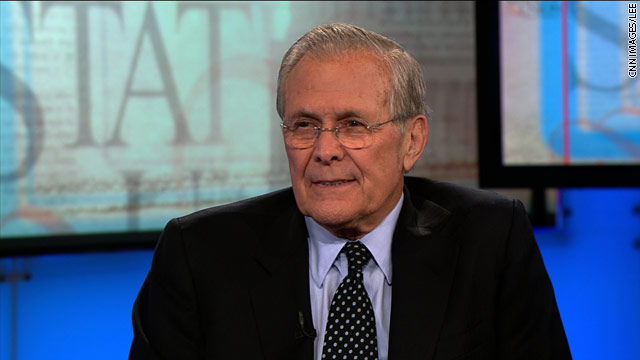 Washington (CNN) - Former Defense Secretary Donald Rumsfeld said there's no evidence to support the premise that the United States is "liked" more now that Obama is president, an idea touted by his supporters.

"No, and I don't think there's data that supports that," Rumsfeld said Sunday on CNN's "State of the Union." "I think he has made a practice of trying to apologize for America. I personally am proud of America."

He was also critical of the president's Nobel Peace Prize that he received shortly after taking office in 2009.

"Well, he had not accomplished a thing when he got the Nobel Prize," Rumsfeld told CNN Chief Political Correspondent Candy Crowley. "It was given to him on hope. Had to have been because there wasn't anything that he'd done. He'd been in office 15 minutes."

And despite receiving some boos when he recently was honored at the Conservative Political Action Conference, the annual gathering of conservative activists, Rumsfeld said the Tea Party has brought "a lot of energy into public life and public affairs."

He said he's "deeply worried about the budget" and that the country needs to start saving money now.