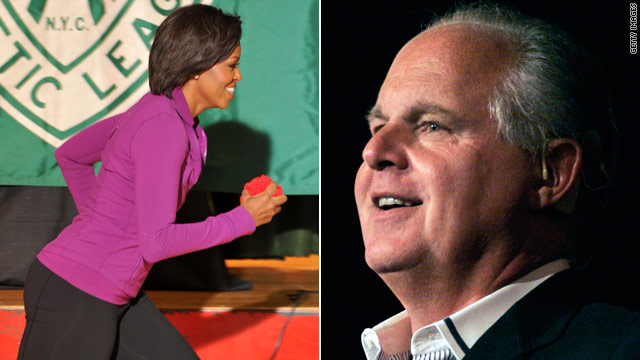 Washington (CNN) - Michelle Obama is taking heat from talk-radio host Rush Limbaugh after a report in the Vail Daily that she consumed a not-so-healthy-meal of ribs for dinner while on a recent visit to the Colorado resort, the latest example of conservative angst directed at the first lady's healthy-eating initiative.

"The problem is, and dare I say this, it doesn't look like Michelle Obama follows her own nutritionary, dietary advice," Limbaugh said Monday on his radio program. "And then we hear that she's out eating ribs at 1,500 calories a serving with 141 grams of fat per serving."

The Vail Daily reported Sunday Mrs. Obama dined at the restaurant Kelly Liken in Vail Village, ordering "a pickled pumpkin salad with arugula and a braised ancho-chile short rib with hominy wild mushrooms and sautéed kale." The first family, minus the president, went to Colorado for a long weekend of skiing.

"I'm trying to say that our first lady does not project the image of women that you might see on the cover of the Sports Illustrated Swimsuit Issue or of a woman Alex Rodriguez might date every six months or what have you," Limbaugh also said Monday.