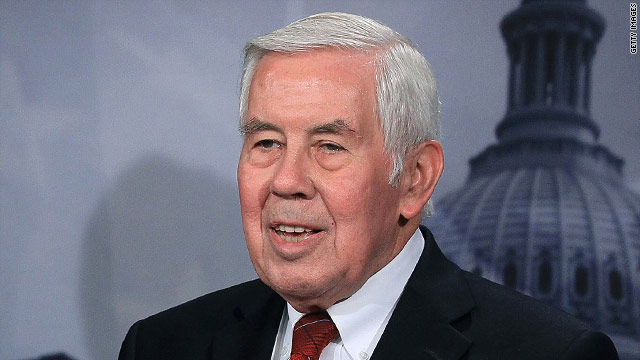 Mourduck made the comments Tuesday morning as he formally announced his primary challenge to Lugar. Mourdock kicked off his campaign with an event in the state capital of Indianapolis, to be followed by a three-day swing across the entire state of Indiana. The state treasurer says he's got the backing of almost three-quarters of the state's GOP county party chairmen and women.

"Almost three quarters of the Republican county chairs say its time to dump Dick Lugar and to me that's the real story here," Mourdock told CNN Tuesday morning. "It isn't that the state treasurer is announcing that he's going to be a candidate. It's the grassroots of this state of saying it's time. We've seen Mr. Lugar for 35 years. He's done admirable service but his votes of late of pushing the Obama agenda are not in tune with the vast majority of Republicans and certainly not in tune with the Republican grassroots leadership, which is the county chairmen."

Mourdock says the Republican state committee will stay neutral, but adds he has significant support among those 18 committee members and that he'll "announce that later."

Lugar, the most senior Republican member of the Senate, is running next year for a seventh term in office. He's been criticized by many tea party activists and other grass-roots conservatives recently for his early public openness to vote in favor of the New Strategic Arms Reduction Treaty (New START) with Russia. They are also upset with Lugar for his willingness to work with Senate Democrats to seek bipartisan solutions for his votes in favor of President Obama's Supreme Court nominees, and for his 2008 vote in favor of the Troubled Asset Relief Program, better known as TARP.

But senior Lugar adviser Mark Helmke touts the senator's votes against the stimulus bill, his vocal opposition to the health care bill and his votes to block government overreach through the Dodd- Frank financial regulatory reform bill.

Helmke tells CNN that "we welcome all Republicans, tea party and other Constitutional movements who oppose ObamaCare and his tax and spend policies."

Mourdock says that he travels extensively throughout Indiana and that has contributed to his backing by the county chairs. He also says he's noticed during his travels a rising opposition by Republicans to Sen. Lugar's actions.

"If you had told me four months ago that I'd be doing this, I would have said it wouldn't happen, but the county support is so strong out there, I had to respond to their requests," Mourdock tells CNN. "The thing that's so impressive to me is as I go to the Lincoln Day dinners I have people coming up handing me one hundred dollar bills, giving me their business cards. The hard core Republicans that go to the events are ready to reach into their pockets, they're volunteering to do events for me. It's an unbelievable response."

Mourdock may not be the only candidate to challenge Lugar in a GOP primary. Among the others mentioned is state Sen. Mike Delph. Mourdock says he's in contact with Delph.

"We know we both cannot do this. We know that a primary that would have multiple candidates in it would work to Mr. Lugar's advantage," says Mourdock.

That's what an organization called Hoosiers for a Conservative Senate is hoping to avoid. The group, which is working to find a consensus candidate to take on Lugar next year, recently held a meeting that attracted tea party activists and other grassroots conservatives from across Indiana.

"Hoosiers for Conservative Senate is pleased to learn that Senator Lugar will be challenged in the Indiana primary for the 2012 US Senatorial race. Treasurer Mourdock's candidacy is undoubtedly the first of more to follow," Greg Fettig, a co-founder of Hoosiers for Conservative Senate, tells CNN. "We wish Treasurer Mourdock well, and while we cannot know at this time whether or not he will become our next senator, we are certain that Senator Lugar will not represent Indiana in 2012."

Mourdock says he enjoys tremendous backing by tea party activists, but says he does not want to be labeled the "tea party" candidate.

"I think Mr. Lugar will try to portray me as the tea party candidate, but with nearly three-quarters of the Republican county chairmen behind me, I'm the Republican candidate. I'll have tremendous tea party support, because as someone wrote recently, 'I was tea party before there was a tea party.' That is my political philosophy and always has been," says Mourdock.