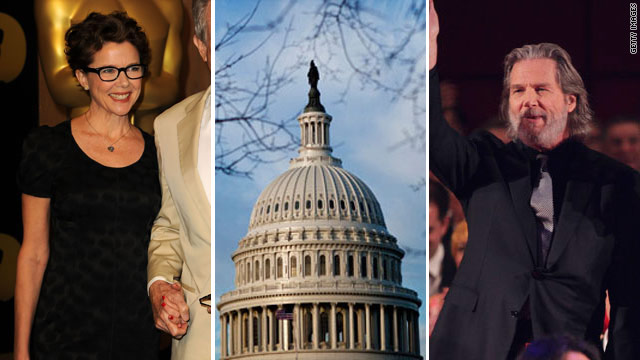 And the winner is?

Washington (CNN) - As Hollywood prepares to give out the Oscars on Sunday honoring best performances in movies, a Washington watchdog group is getting in on the action - giving out its own awards based on which Academy Award nominees gave the most money to politicians and political groups.

For the second year in a row, OpenSecrets.org, part of the non-partisan Center for Responsive Politics, is handing out its Money-in-Politics Oscars to a series of nominees as it tries to shed light on what it calls "the cozy relationship between the cinematic and political elite." The center tracks the influence of money in politics and lobbying.

Jeff Bridges, up for a Best Actor in a Leading Role Oscar in "True Grit" wins this group's award. According to the center, he and his wife donated nearly $68,000 in contributions to federal candidates, party committees and the political group MoveOn.Org.

Among the five nominees in the Best Actress category, Annette Bening, who is in "The Kids Are All Right," is the winner. She has contributed more than $26,600 to left-leaning politicians and Democratic party committees, the center says.

Of the various persons up for the top six Academy Awards, 19 contributed to politicians, political parties, political action committees or independent expenditure organizations since 1990.

The center finds that of the $1.3 million donated by these individuals just to federal candidates, parties and PACS, more than $1.24 million benefitted Democrats.

That doesn't count the money that went to independent expenditure groups, which can accept unlimited donations. The producer of "The Kids Are All Right," Jeffrey Levy-Hinte, and his wife gave more than $3.6 million to so-called 527 organizations - and more than $3.3 million went to ones identified with Democratic or liberal causes. The Levy-Hintes also contributed more than $884,000 to federal candidates and party committees.

The center also came up with its own special categories. Among them:

Most Popular Party Committee. The winner is the Democratic National Committee, which received nearly $344,000 in donations from this year's nominees.

Outcast Award. This one goes to Michael De Luca, producer of "The Social Network," who gave one of only two contributions to a Republican group or individual. He gave $7,500 to the National Republican Senatorial Committee during the 2004 cycle.