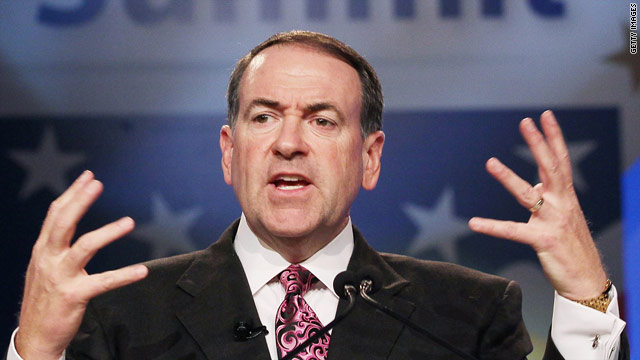 On his feelings about the Libya crisis:

"I think I'd make it very clear that the United States is not going to stand by and watch a country slaughter its own people in cold blood, that there is a sense in which there's a virtual genocide going on. I'm still hopeful that Libya's army will take Gadhafi out and I think that's the solution we can all hope for. There's clearly a man who has virtually escaped the asylum who is in a position of extraordinary power."

"But when a person starts talking about killing his own citizens and then following up on it, creating rivers of blood in his own streets and blowing up the one resource that his country has to give it a foundation for any economic hope, he's clearly a mad man and this is a person who is maniacal and now we are beginning to learn that he did in fact order the bombing of Pan Am 103 over the Lockabee, the disco in Berlin. You know these are acts of international terrorism and I expect more than a strongly worded letter from the UN."

On what actions he'd take toward Libya if he was president:

"I think a no-fly zone would be absolute – yeah a no fly zone very important because that way you keep him from flying mercenaries in, maybe even a naval armada somewhere off the 3 mile international boundaries, just as a presence, and even to say we stand ready to do what is necessary to make sure there's not an act of genocide against those people."

On whether President Obama is being too timid in his handling of the crisis:

"In light of the urgency, but I don't have the NSA report sitting in front of me. So I'm always a little careful to say, here's what I would do, because I think you have to base a decision based on good intelligence and information which a person in my capacity as an ordinary citizen at this point simply doesn't have."

On the role his new book plays in his presidential decision-making process:

"This is the message. If people read this book and say those are some ideas I can relate to, these are ideas I think would be good for the country, then that's going to help me believe that there is real support for what I stand for. I don't think politics and running for president is just about can I go through the political manipulations to get the job. It's, if I get that job, do the people of the country support what I would do and I think I owe it to them to say, 'Here's what I do, here's where I stand. These are my principals.'"

On Indiana Gov. Mitch Daniels' call for a "truce" on social issues until economic problems are dealt with:

"I make it very clear, in the very first chapter, I establish that the issues about family and marriage are economic issues. We have a 300 billion dollar a year dad deficit in this country. That's the cost that the taxpayers for dads who disappear and let the government pick up the tabs for their kids. We have an issue also where two thirds of the children of this country who live in poverty wouldn't live in poverty if their mothers were married to the fathers of those kids. So when people say, 'I don't want to talk about social issues' - and let me be very clear, I love Mitch Daniels. I think he would be a great presidential candidate, I think he would be a good president, but I'm not arguing with Mitch Daniels. I'm making the case that you cannot say these are peripheral issues if you really are concerned about the economy because there is an economic consequence of a broken family."

"I think it's a bully pulpit and it goes beyond just Roe versus Wade. See, all that did was say that the states no longer could make the decision, the federal government would. If you turned it back to the states, some states would have more liberal abortion than they have now. It wouldn't necessarily fix anything and then you have this geographical morality which I find absurd. That is the logic of the civil war, that you can have some states where slavery is okay and others where it isn't. That doesn't make sense. If it's right then everybody ought to abide by it. If it's wrong, them everyone ought to change. So the question is, is it right for one human being to take the life of another human being because it represents a financial burden or a social disruption? Now that's an argument we can have but once we've had it, we have to decide that either it is okay or isn't okay. I say it's not okay."

"I think the president stepped off into a deep hole when he decided arbitrarily and I think illegally that his attorney general and his justice department will not even defend the law of the land which is the Defense of Marriage Act. I think I've spent a page, maybe a page and a half of that entire book dealing with this issue. It'll probably get a lot of controversy. I invite people to read it for themselves. Read it and if they think that I'm off-base, fine – then they can sell it at a used book store.

"Government should legislate affirmation of what marriage is. Marriage is not whatever we want it to be. Marriage is a man and a woman committed in a relationship for life, that's all it's ever been. Thirty-three states have had this on the ballot. Thirty-three, including very liberal states like Maine and California, and in every one of those states, no exceptions, none, those states have affirmed marriage to mean what it has traditionally meant.

On Mitt Romney's imposition of a universal health care plan in Massachusetts when he was governor:

"I think the objective analysis of the Massachusetts plan has been that it is done exactly opposite of what it was supposed to do. It was supposed to lower costs, it raised costs. Supposed to create access, people now have a hard time getting into the doctor. It was supposed to open up broader levels of coverage, now people are having to cut back coverage because they can't afford everything that they put out there on the plate… I don't think this is a political killer for Governor Romney, but I think he has to come out and say, 'States are supposed to take bold actions.'" I mention in the book the quote by Louis Brandeis, Supreme Court justice back in 1932, who talked about states as a laboratory so that you test it in a state, not the whole country. If it works you do it, if it doesn't work you don't inflict it upon the other fifty states."