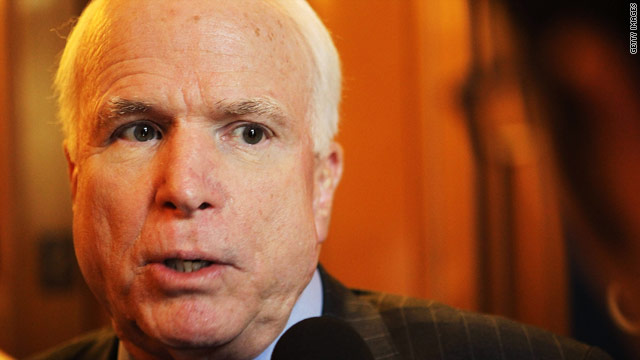 McCain had most conservative voting record in 2010

Washington (CNN)– Sen. John McCain, along with six others, can claim the title as the most conservative Republican senator in last year's congress, according to the National Journal's 2010 vote ratings, a dramatic shift from the Arizona Republican's voting record earlier in the decade.

The National Journal's analysis of 96 Senate votes taken in 2010 earned McCain an 89.7 composite conservative score, which tied him with established staunch conservatives such as Sens. Jim DeMint, R-South Carolina, and Cornyn, R-Texas.

McCain's venture farther right is just one example of an apparent shift of the Republican Party as a whole over the last two years, according to the National Journal.

Previously known for reaching out to his colleagues across the aisle, McCain earned his maverick title in part because of a voting record that exhibited a less partisan stance towards some pieces of legislation, like campaign finance and immigration. According to the National Journal's vote ratings, between 2002 to 2006 McCain bounced between the 44th- and 49th-most conservative member.

McCain's 2010 voting record may in part have been influenced by the conservative primary challenge he faced last year from former Rep. J.D. Hayworth, who repeatedly painted the longtime senator as too liberal.