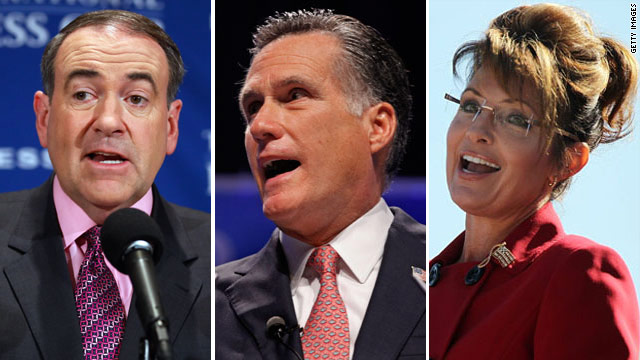 Washington (CNN) - Republicans know who they trust when it comes to their most valued issues, which may also decide whom they favor. Though Mike Huckabee, Mitt Romney and Sarah Palin all hover at the top of most supported potential 2012 GOP nominees, four sets of issues divide them among Republicans and Republican-leaning independents, according to a Gallup poll.

The survey reveals that respondents who care most about government spending and power are more likely to support Southern Baptist minister Mike Huckabee, the former governor of Arkansas, or Mitt Romney, former governor of Massachusetts.

When it comes to business and the economy, Harvard MBA-toting Romney ranks highest, while those who value social and moral issues most favor Huckabee.

More GOPers and GOP-leaning independents that rank national security and foreign policy as the issue most important to them support former Alaska Gov. Sarah Palin over the other three frontrunners, though Huckabee is also a favorite.

The Gallup poll surveyed 1,326 Republicans and Republican-leaning independents by telephone from February 18-20. It has a sampling error of plus-or-minus three percentage points.