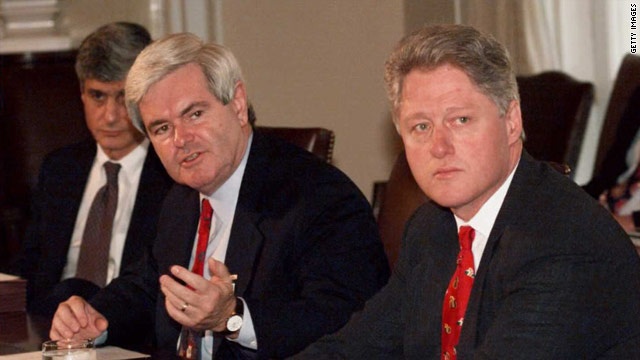 After all, Gingrich says, the effects of the last government shutdown weren't all that bad.

"Those who claim that the shutdown was politically disastrous for Republicans ignore the fact that our House seat losses in 1996 were in the single digits," Gingrich writes in a Washington Post editorial to be published Sunday. "Moreover, it was the first time in 68 years that Republicans were reelected to a House majority – and the first time that had ever happened with a Democrat winning the presidency."

Gingrich was the House Speaker during the last government shutdown at the end of 1995 – a three-week event that has since been attributed to rocketing President Bill Clinton back into political favor among the electorate after a bruising midterm election defeat for the Democrats in 1994. It's also credited with putting initial chinks in Gingrich's armor and beginning a steady decline that led to his 1999 resignation.

With an eye toward those events, House Republicans have repeatedly said they are trying to avoid another shutdown at all costs, in hopes of nixing Democrats' efforts to paint the GOP as needlessly confrontational.

But Gingrich, who could make an announcement within the next two weeks on whether he'll form a presidential exploratory committee, says the last government shutdown's bad reputation is due to inaccurate media reports about the GOP's true intentions.

"Our attempt to balance the federal budget was distorted in the news media as an effort to ruin family vacations, frustrate visitors to the nation's capital and prevent government employees from going to work. For the Republican leadership, the effort to hold together the House and Senate caucuses while negotiating with the White House became extraordinarily exhausting," he writes.

The 1995 shutdown actually happened twice – first for five days in November of 1995 and then for three weeks between mid December to early January of 1996. Republicans ultimately compromised with a newly-energized Clinton after the public backlash suggested the GOP was taking a huge political hit.

But Gingrich writes House Republicans should remember the broader results that came out of the whole affair:

The ultimate result was the first four consecutive balanced budgets since the 1920s, paying off more than $450 billion in federal debt," he writes. "We also overhauled welfare – the most successful and popular entitlement reform of our lifetime – strengthened Medicare and enacted the first tax cut in 16 years. It was this tax cut that boosted economic growth and allowed us to balance the budget four years earlier than projected."

The government is currently set to shutdown at midnight next Friday if Republicans and Democrats cannot agree to a budget deal.