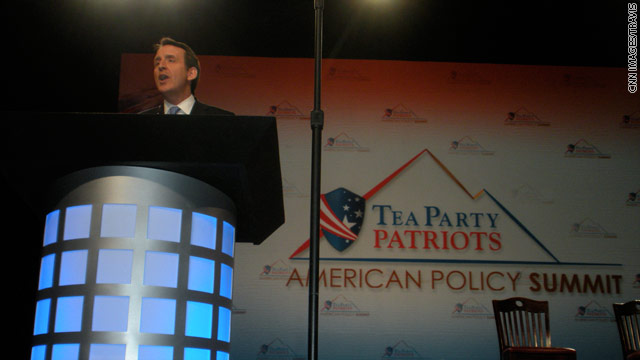 Phoenix (CNN) - With no Mitt Romney, Sarah Palin, Newt Gingrich or other potential presidential candidates in attendance, Tim Pawlenty did not have to elbow much for speaking and face time with conservative activists gathered at the American Policy Summit in Phoenix on Saturday.

Amid the thin lineup of potential candidates at the Tea Party Patriots' three-day event, the friendly crowd was served red meat from the former Minnesota Republican governor - who emerged on stage to a splashy video presentation.

As the normally mild-mannered Pawlenty continued, he wielded a double-edged rhetorical sword: appealing to the crowd's insistence on constitutional adherence - while also reiterating his recent lashing out at the president.

"The Constitution was not written to limit freedom, it was written to limit government," Pawlenty said. "It appears President Obama has forgotten what this says. It says in the Constitution: 'In order to form a more perfect Union.' Mr. President, that does not mean coddling out-of-control public employee unions. And Mr. President, Wisconsin does not need a lecture from somebody who's never balanced a budget in his life."

Pawlenty recently launched a website praising Wisconsin Republican Governor Scott Walker as he battles with union opponents of a Republican bill that would strip most state workers of the bulk of their collective-bargaining rights. On the site, Pawlenty said Walker is "making tough choices needed to avoid financial ruin."

Pawlenty is appealing to a group whose support he'll surely need should he decide to run for president. Recently, he's made the rounds of conservative events, visited early 2012 primary states, and traveled the country selling his book that's part memoir, part conservative manifesto, "Courage to Stand."

In his Saturday address, Pawlenty even used punched-up humor to appeal to the conservative activists.

"Do you remember the guy who ran in the New York City mayor's race, who ran his entire campaign on a simple motto?" the former Minnesota governor asked.

"He said over and over: 'The rent is too damn high.' So here's our simple motto: 'The government's too damn big!'

Two other potential presidential candidates are also attending the event.

Representative Ron Paul spoke after Pawlenty. The Texas Republican enjoys a committed base of support in some conservative circles. He laid out familiar themes that often excite his followers.

"The deficit that we're dealing with, and the momentum behind the spending, is so overwhelming that this is only going to be turned around with a major, major event," Paul said.

He continued by reiterating his stances of eliminating the Federal Reserve and income taxes.

"How did we get into this mess?" Paul asked.

On Friday night, conservative radio talk-show host Herman Cain brought the crowd to its feet with statements like, "We will survive two more years of Barack Obama until we can replace him."