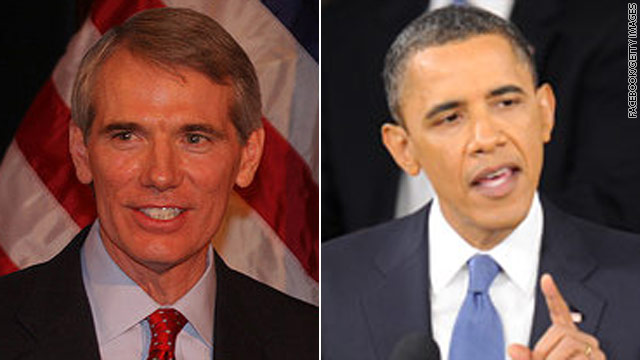 Obama urged Democrats and Republicans to find common ground "so we can accelerate, not impede, economic growth."

"For the sake of our people and our economy, we cannot allow gridlock to prevail," Obama said in Saturday's message. "Neither party will get everything it wants. Both sides will have to compromise."

The newly elected senator from Ohio stressed "getting our debt and deficits under control," as the most important step Washington can take to create jobs and stimulate the economy.

"Our goal as Republicans is to make sensible reductions in this spending and create a better environment for job growth, not to shut down the government," Portman said in the weekly GOP address Saturday.

This comes after Senate Democrats tentatively embraced a plan Friday proposed by Republicans to immediately cut $4 billion in federal spending as part of the plan that would keep the government running until March 18. The current short-term spending plan, or continuing resolution, expires March 4.

But despite the bipartisan rhetoric, the weekly messages also looked ahead to the larger impending budget fight.

Portman said the president's 2012 budget proposal would double the national debt and lock in higher levels of spending.

"He rejected the dire warnings and recommendations of his own fiscal commission and not only kicked the can down the road but made the road more perilous by advocating deeper debt and ignoring bipartisan calls for entitlement reform and pro-growth policies, including tax reform and regulatory restraint," Portman said.

But the president said his proposals, which include a freeze on annual domestic spending over the next five years and do not tackle entitlement reform, are "just a start."

"If we're serious about tackling our long-run fiscal challenges, we also need to cut excessive spending wherever we find it – in defense spending, spending in Medicare and Medicaid, and spending through tax breaks and loopholes," Obama said.