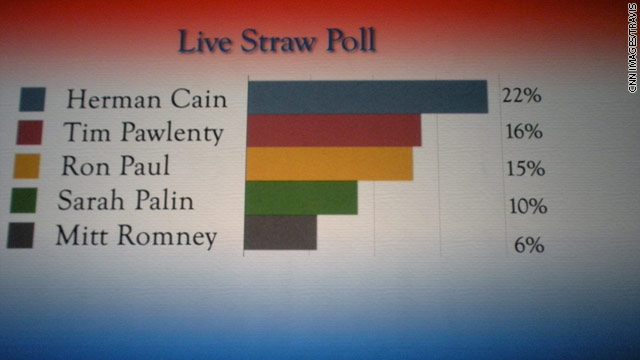 Phoenix (CNN) - Which Republican should become the next president? Herman Cain, according to a number of Tea Party activists gathered at a weekend summit in Phoenix.

The survey is a chance for conservative activists gathered on the last day of the Tea Party Patriots conference to name their favorite presidential picks.

"The mood at this summit shows that Tea Party activists are looking for leaders who share our principles of fiscal responsibility and limited government and who will vow to uphold policies that reflect those principles once in office," said Jenny Beth Martin, national coordinator of Tea Party Patriots.

"Mr. Cain and Rep. Paul's positions resonated with Tea Party Patriots this weekend and the straw poll indicates the enthusiasm for these strong conservatives," said Mark Meckler, the Patriots' other national coordinator.

None of the other potential 2012 presidential candidates showed up, citing prior commitments to summit organizers.