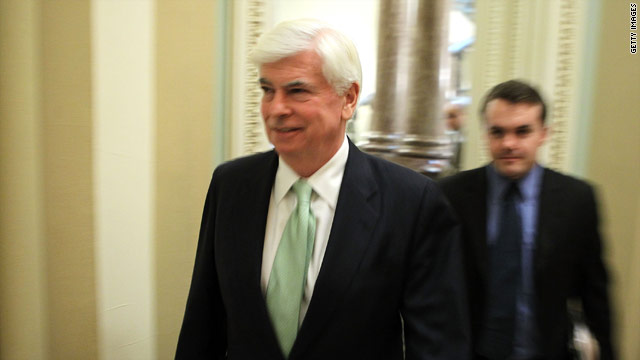 Washington (CNN) - Former Connecticut Sen. Chris Dodd will be the new head of the Motion Picture Association of America (MPAA), the powerful Hollywood lobbying group that advocates for the American motion picture and television industries.

The MPAA on Tuesday officially announced Dodd as their new chairman and chief executive officer. Dodd became a widely speculated candidate for the coveted post after announcing last January that he would not seek reelection, ending a 30-year Senate career.

"I am truly excited about representing the interests of one of the most creative and productive industries in America, not only in Washington but around the world," Dodd said in a statement.

The five-term senator became a major power-broker on Capitol Hill, and had key roles in Congress' health care and financial reform efforts. As chair of the powerful Senate Banking Committee, Dodd co-wrote the historic Dodd-Frank Wall Street Reform and Consumer Protection Act, the most sweeping overhaul of the financial system since the New Deal. Dodd stepped in as active chair of the Senate Health, Education, Labor, and Pensions (HELP) Committee after his colleague, Sen. Ted Kennedy, D-Massachusetts, passed away. Dodd continued to have an active role in passing a health care reform bill last March.

His legislative accomplishments drew increased ire, though, as critics accused the longtime senator of being too cozy to the very industry he was tasked with regulating. In announcing his retirement, Dodd acknowledged the toll controversies surrounding his role in financial reform had taken on his political career, telling reporters, "I love my job as your senator. I always have, still do. However, this past year has raised some challenges that insisted I take stock of my life."

Under current Senate rules, former senators are prohibited from lobbying any lawmaker or aide for two years after their departure from the Senate. The rules do not, however, prohibit former senators from being employed by lobbying organizations in other capacities, as in Dodd's case, as chairman.