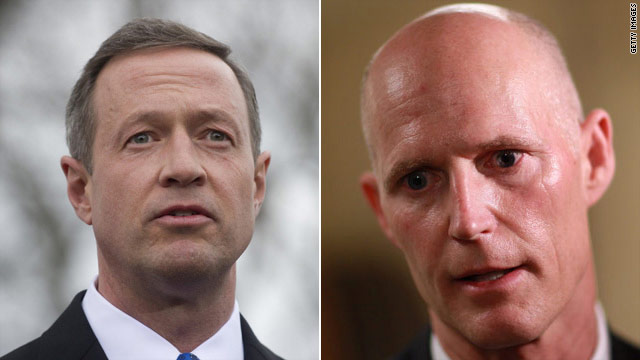 Appearing on CNN's American Morning, Florida Gov. Rick Scott, a Republican, framed the debate in Wisconsin as a matter of fairness.

Scott indicated that state workers in his own state of Florida would be contributing 5 percent to their retirement plans, a measure he described as "treating taxpayers fairly and government workers fairly."

"This is about union bashing. This is about eliminating the unions," O'Malley said. "This is about taking advantage of this crisis in joblessness in our country in order to destroy public employees unions. I don't think it's the way we get things done."

O'Malley continued, "I'm glad that some Republican governors are distancing themselves from this behavior."

Scott argued that he was not attempting to distance himself from the embattled Wisconsin governor.

"I'm not distancing myself from Scott Walker," he said. "What he's trying to do is the same thing I'm trying to do. We've got to balance our budgets. And we've got to treat taxpayers fairly and government workers fairly."