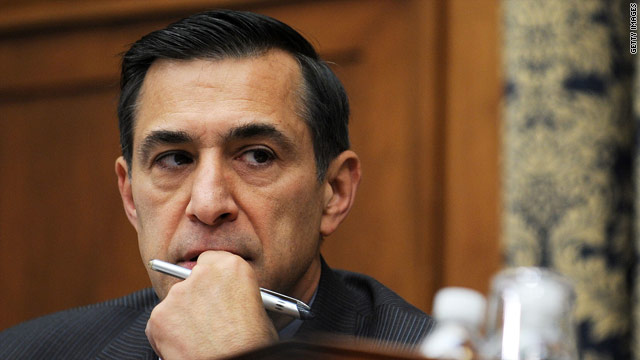 Rep. Darrell Issa, R-California, fired a top aide after it was revealed that the aide improperly shared e-mail correspondence with a reporter.
March 1st, 2011
10:25 PM ET

Washington (CNN) – It’s an old-time newspaper war with a modern twist, as the controversy surrounding the dismissal of a high-profile House aide brought the simmering bad blood between two media powerhouses to a boiling point.

The literal war of words pits the New York Times, one of the nation’s oldest established newspapers, against Politico, a take-no-prisoners new media upstart seeking to turn the journalism world on its head, compounded further by the increasingly quick and complicated world of electronic communications.

But one thing is clear: the uproar is just beginning.

At issue is the extent to which Bardella - a fast-rising Hill aide depicted in a separate Politico article as an aggressive self-promoter, and who once described reporters as “lazy as hell” - has cooperated with New York Times reporter Mark Leibovich, who is on leave from the newspaper to write a book about the political culture of Washington, D.C.

In a story published Monday, Politico said its editor-in-chief, John F. Harris, sent a letter to Issa the day before regarding the allegations, among them that Bardella blind-copied Leibovich on e-mails to other reporters.

“The practice of sharing reporter e-mails with another journalist on a clandestine basis would be egregiously unprofessional under any circumstances,” Politico reported Harris said in the letter.

But the New York Times called foul on Tuesday, reporting that a Politico reporter sought similar access to correspondence between government officials and reporters from major news outlets through a Freedom of Information Act request in 2009.

The request from Politico reporter Ken Vogel sought “copies of all correspondence,” including “but not limited to emails, notes, letters and phone messages — received from or sent to employees or officials of the following media organizations,” according to the New York Times, which suggested that such a request actually sought more information than what Bardella had allegedly shared with Leibovich.

In response to the New York Time’s story, Harris defended the FOIA request, saying Politico eventually narrowed its scope, and that it never resulted in a story. Harris also said that there was a difference between the information Politico sought, and that which was allegedly exchanged between Bardella and Lebovich, saying there “should be ‘a reasonable expectation’ that when reporters deal with government officials, ‘they are not either literally or in a very real figurative sense, letting someone listen in on the line.’”

Leibovich was the author of a lengthy tome on star Politico reporter Mike Allen, whom Lebovich depicted as the ultimate insider reporter, considered by many -– including White House officials -– as “some variation on ‘the most powerful’ or ‘important’ journalist” in Washington. That piece ran in the New York Times magazine last April.