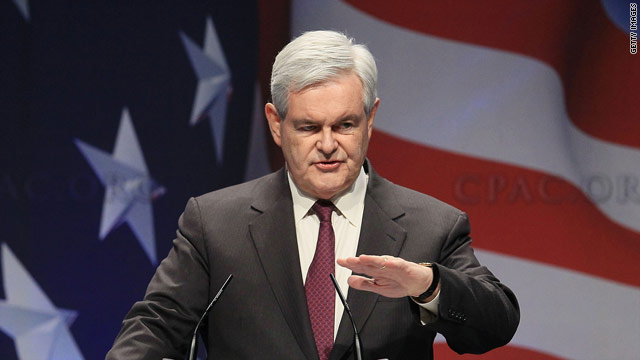 Washington (CNN) - Former House Speaker Newt Gingrich will announce Thursday that he is launching a committee to explore a run for the GOP presidential nomination in 2012, a Republican familiar with the plans told CNN.

Gingrich's decision to form an exploratory committee and officially "test the waters" makes him the first major Republican contender to enter the presidential race.

Thanks to a national profile from his days as House Speaker and a reputation for delivering headline-grabbing broadsides against Democrats, Gingrich is among four Republican contenders who regularly finish atop national polls that survey Republicans about their choice for the GOP nomination in 2012.

Gingrich, who served in Congress for 20 years until his retirement in 1999 after four as House Speaker, has made noise about running for president in the past. But his activities in recent years have marked him as a more serious prospect in 2012.

His policy group American Solutions, a 527 group that can solicit unlimited corporate and individual contributions unlike the political action committees favored by the rest of the potential 2012 candidates, took in more than $14 million in 2010.

Much of that total financed Gingrich's robust travel schedule as well as the group's political activities, including a nationwide series of training sessions for conservative activists during the 2010 midterm cycle.

Gingrich has made repeated visits to the early caucus and primary states that play an outsized role in determining the nominee, particularly Iowa, which holds the first-in-the-nation caucuses, and South Carolina.

Will Rogers, the former chairman of the Des Moines-area Polk County Republican Party, told CNN that Gingrich is certain to run "a high level campaign operation here" if he decides to move beyond the exploratory phase.

"My feeling is that he looks like he is somebody who is going to run," said Rogers, who has known Gingrich for six years and plans to work for him if he embarks on a full-fledged candidacy. "He is doing the things that people need to do in order to become a frontrunner in the state of Iowa."

When he makes the formal announcement on Thursday, Gingrich will become the second prominent Republican to form an exploratory committee after former radio host Herman Cain, a popular figure among grassroots conservatives and Tea Party activists.

The Federal Election Commission lists several guidelines, some of them vague, for the presidential exploratory phase. But according to the FEC, when a potential candidate's exploratory committee raises or spends more than $5,000, he or she is no longer "testing the waters" and must register as a candidate.

Gingrich is a currently under contract with Fox News as a political analyst. CNN reached out to Fox News seeking comment about whether Gingrich will still be employed while exploring a 2012 bid, but a spokesperson for Fox News has not yet responded.

UPDATE: Gingrich will make the announcement in Atlanta, where he is slated to meet with Georgia Gov. Nathan Deal.