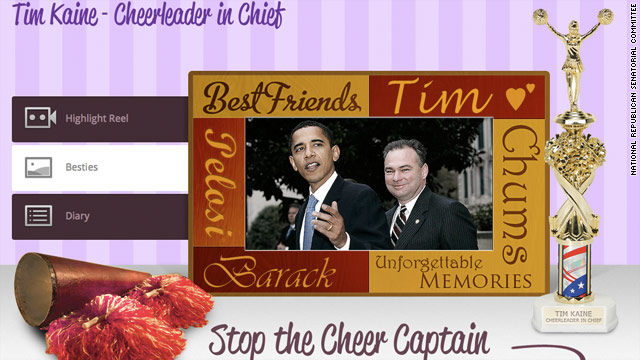 (CNN) - The National Republican Senatorial Committee wants supporters to 'Stop the Cheer Captain' before he starts. Though Democratic National Committee Chairman Tim Kaine hasn't yet made a decision on a U.S. Senate bid for Virginia's open seat, the NRSC has launched a new website to rally voters wishing to stop him in his tracks.

The website, found at cheerleaderinchief.com, depicts a pom-pom wielding Kaine in a cheerleader's uniform backed by less than cheerful chants about the chairman's performance. Described as "dunkin on that stimulus, oh, he fumbled," Kaine is encouraged to "rock that rubberstamp" in a parody that is accompanied by an "album" of photos featuring Kaine with the commander-in-chief and Democratic leaders. "Captain" Kaine is branded as Obama's "number one cheerleader, cheering from the left."

A Democratic party source tells CNN, "They spent an awful lot of money and went to an an awful lot of trouble on this lame attack against someone not even in the race. I know they're going to have a bloody primary with deeply flawed candidates, but you'd think they'd be better at hiding how worried they are about it."

And a spokesman for the Democratic party of Virginia weighed in, saying "This ad makes two things clear. First, Republicans aren't funny. They just aren't. Second, they're aware of just how weak their prospects are in 2012. Making lame videos about a man who hasn't even declared to run might make them feel better, but it won't change the fact that they're facing a divisive primary and their favored candidate George Allen has already lost this seat after spending six mediocre years in the Senate running for president and complaining about how bored he was."

Democratic Virginia Sen. Jim Webb decided against a run for re-election last month, leaving Democrats reeling and determined to save the seat in a state that generally leans Republican. Two GOPers have already announced their candidacy: former Sen. George Allen, who was defeated by Webb in 2008, and Tea Party activist Jamie Radtke, who hopes to quell Allen's hopes of redemption.

Kaine, whose decision may come any day, is the most prominent name on the list of potential candidates, and has spoken with President Obama about the possibility of running. Though Obama has openly stated that Kaine would be a "great senator from Virginia" if he chose to run, former members of Congress from Virginia Tom Perriello and Rick Boucher are also on the possible candidate roster.