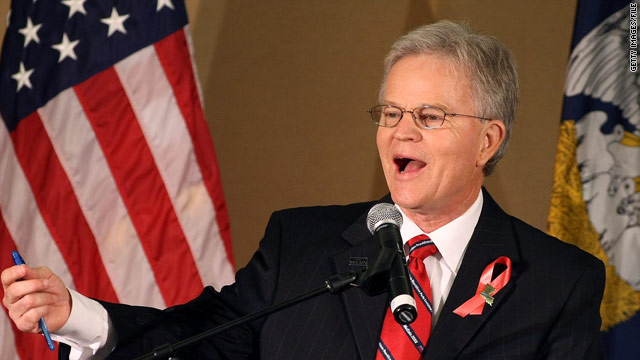 "I will tell the public here and across America that I am concerned about the problems in America and the opportunities that aren't being taken advantage of," Roemer said in a phone interview from his new campaign office in Baton Rouge.

The announcement comes just days before Roemer is slated to participate in a presidential forum sponsored by the Iowa Faith & Freedom Coalition in Iowa, which will host the first contest of the Republican nomination fight early next year. He will join three other potential candidates at Monday's event in Des Moines: former Minnesota Gov. Tim Pawlenty, former Pennsylvania Sen. Rick Santorum and former pizza magnate Herman Cain.

Roemer will also make his announcement at roughly the same time Thursday afternoon that former House Speaker Newt Gingrich is expected to announce in Atlanta that he will enter his own presidential exploratory phase.

A former Democrat, Roemer served seven years in Congress before winning an underdog bid for the Louisiana governorship in 1987, when he toppled legendary former Gov. Edwin Edwards in a nonpartisan "jungle primary."

Roemer switched parties to become a Republican in 1991 and lost his subsequent re-election bid. After leaving office, Roemer founded Business First Bank in Baton Rouge but re-emerged on the political scene in 2008 as a surrogate for Sen. John McCain's presidential bid.

After conferring with his family and business associates, Roemer said he talked to the Arizona senator before deciding to explore what many GOP insiders are sure to dismiss as a whimsical White House bid.

Roemer listed off a series of issues that motivated him to join the presidential fray, including the mounting national debt, a burdensome tax code and the need for fiscal restraint.

But he said the influence of special interest money in politics would be the driving factor behind his exploratory effort. Roemer said he plans to refuse money from political action committees and will cap individual campaign contributions at $100.

"It is my opinion that the money has washed over Washington like a tsunami," he said. "The leaders are not free to do what needs to be done. They are addicted to special interest money, to bundled money, to Wall Street money, to banks too-big-to-fail money."

Though Roemer will be in Iowa on Monday, he said that campaigning in the Hawkeye State is an expensive proposition and suggested that the primary states of New Hampshire and South Carolina would be friendlier terrain - the former because of its intimate political culture and the latter because of his southern roots.

Roemer said he has currently no paid staffers but is taking advice from a small group of friends and volunteers, including Mark McKinnon, the former media adviser for George W. Bush who assisted Roemer during his 1987 gubernatorial bid.