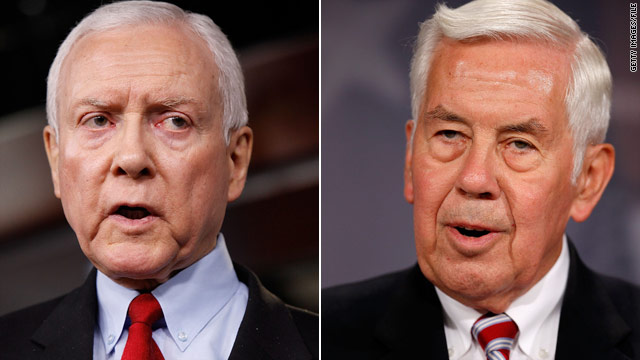 Washington (CNN) - Two long serving Republican senators who could face primary challenges from the right as they run for re-election next year both showed up Tuesday night at a reception held by a leading grassroots conservative organization.

Senators Orrin Hatch of Utah and Dick Lugar of Indiana separately attended the function, put on by FreedomWorks at their new headquarters, which is located just a few blocks from the U.S. Capitol building.

FreedomWorks is a nonprofit conservative organization based in the nation's capital that helps train volunteer activists and has provided much of the organization behind the Tea Party movement. The group also supports conservative candidates in Republican primary and general election contests.

FreedomWorks says both senators, as well as every other Republican and Democratic lawmaker in Congress, were invited to their open house to show off the group's new offices.

The bigger of surprise of the two is Lugar, who is already facing a primary challenge from the right. Late last month Indiana State Treasurer Richard Mourdock announced his bid for the GOP nomination.

Lugar, the most senior Republican member of the Senate who's running next year for a seventh term in office, has been criticized by many Tea Party activists and other grass-roots conservatives for his willingness to work with Senate Democrats to seek bipartisan solutions, for his votes in favor of President Obama's Supreme Court nominees, and for his 2008 vote in favor of the Troubled Asset Relief Program, better known as TARP. They were also upset with him for his early public openness to vote in favor of the New Strategic Arms Reduction Treaty (New START) with Russia.

A senior FreedomWorks official was recently in Indiana, meeting with grassroots conservatives, including members of Hoosiers for a Conservative Senate, which was formed to find a consensus candidate to primary challenge Lugar.

FreedomWorks President Matt Kibbe tells CNN that Lugar told him he wanted to come by to meet the folks at FreedomWorks. Kibbe adds that Lugar did not bring up any talk of campaign politics.

Lugar met late last year in Indiana with Tea Party activists. Mark Helmke, a senior advisor to the senator, tells CNN that "the senator and staff have reached out to numerous individuals and groups saying they are members or are sympathetic to the tea party movement. Lugar sees eye to eye with them on fiscal and spending issues."

Hatch, who wants to avoid Bennett's fate, has a history of reaching across the aisle to work with Democrats - a fact that obviously does not sit well with many Tea Party activists and other conservatives. But Hatch has taken steps since last year to buffer himself from criticism from those on the right by highlighting his conservative chops. He recently led the Senate GOP push for a balanced budget amendment and was a co-sponsor of a Republican amendment to repeal the new health care law. Last month he also landed a perfect score in the American Conservative Union's 2010 ratings.

Kibbe says in his conversation with Hatch, the six-term senator emphasized his conservative record and said he was looking for opportunities to work with FreedomWorks on such things as a balanced budget amendment.

"Senator Hatch understands that grassroots conservatives and now the tea party movement are critical to our democracy and the vitality of the Republican Party," Hatch spokeswoman Antonia Ferrier tells CNN. "Any success Republicans have had in fighting the Obama agenda is owing to the commitment of citizens inspires by the Tea Party movement. It is with that fundamental respect to restore constitutional limits on the federal government that Senator Hatch stopped by Freedom Works open house this evening."

As with Indiana, a senior FreedomWorks official was recently in Utah, meeting with grassroots conservatives about possible challenges to Hatch.

One possible conservative challenger could by Rep. Jason Chaffetz, who was re-elected last November to a second term. He recently told the Deseret News that a run for the Senate is "a definite maybe," and said he intends to make his decision before the autumn.

While FreedomWorks officials are meeting with activists in both Utah and Indiana, they emphasize that they have not endorsed any challengers or the incumbents in those two states in this early stage of the election cycle.