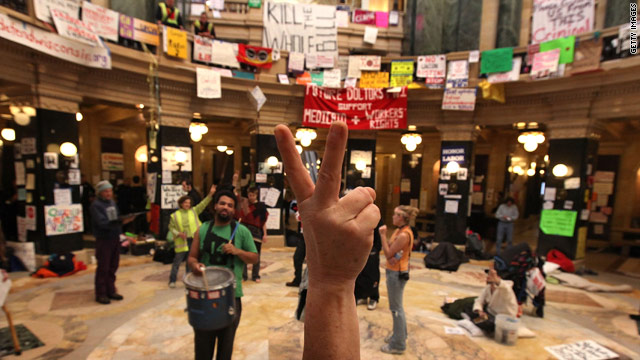 (CNN) –The Republican National Committee is going up on Wisconsin airwaves with a television ad that blasts President Obama for "standing in the way of economic reform" and "intimidating taxpayers."

One day after Republican Gov. Scott Walker unveiled his budget to rein in the state government's $3.6 billion dollar deficit, the RNC released the ad to urge support for the governor whose cost-cutting bill ignited protests weeks ago.

According to an RNC statement, the ad is designed to showcase "the effort by Democrats and government unions to obstruct Republican reforms to tackle the debt at all levels of government" and slams preparations for Obama's re-election campaign, saying that "he'll spend every penny" of a "billion dollar campaign."

Grouping him with "union bosses" the ad claims that Obama is "intimidating taxpayers" and "leaving classrooms empty" in an effort to rally supporters to "stop Obama and his union bosses today."

Union members flocked to the Wisconsin state capitol in Madison in recent weeks following the introduction of a bill that would limit collective bargaining rights for state workers. The bill has stalled in the state assembly since members of the Democratic delegation left the state and prevented the quorum needed to vote. Walker has called for the legislators to return.

In their statement, the RNC said that "Democrats and their union allies insist on standing in the way of strong Republican budget reforms…With the same union bosses lined up to fund Barack Obama's billion dollar re-election campaign, we must continue to stand with Republican governors across the country." The ad was originally released on the internet but only started airing on paid television Wednesday.

The ad will run through the end of the week in Madison and Milwaukee.