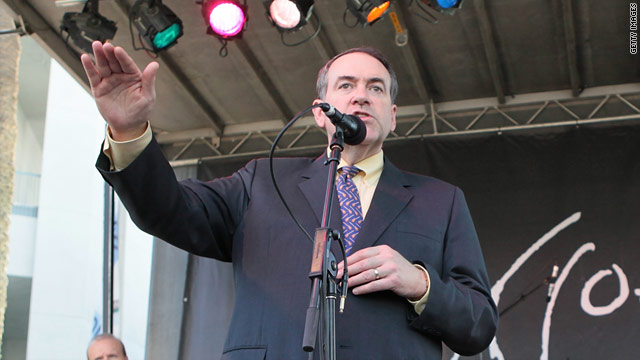 Poll: Huckabee leads in the South

(CNN) - Former Arkansas Gov. Mike Huckabee is a popular presidential hopeful in the southern states, according to a new Winthrop University poll, which indicates that two in ten southern adults say they'd vote for Huckabee as the next GOP nominee.

When asked who would be their first choice as the next Republican nominee, 22 percent of respondents chose Huckabee, who's not new to the game, having run in 2008 for the Republican presidential nomination. Former House Speaker Newt Gingrich came in a distant second with 13 percent support. Nine percent of probable GOP primary voters said they'd choose former Alaska Gov. Sarah Palin as the next Republican nominee, ranking her third in the survey. She was among nine candidates who received single digit support out of the 15-candidate pack.

"Huckabee has always had a strong base in the south, it was area of strength for him in 2008 and a lot of people were surprised when (Sen. John) McCain surged ahead of him later, so it's not surprising that before the full campaign begins his name floats to the top in a list of rank-and-file Republicans in the South," Scott Huffmon, Associate Professor of Political Science at Winthrop University, tells CNN.

Businessman Herman Cain, the only person to formally open a presidential exploratory committee, out-ranked both Congresswoman Michele Bachmann of Minnesota and Mississippi Gov. Haley Barbour, in the survey. Almost two percent of voters in the South favor Cain as the Republican nominee; Bachmann and Barbour both received one percent support.

The poll included names taken from possible candidates who received votes during the Conservative Political Action Conference straw poll, held in February, specifically to gauge where "people who activists like" fared among "southern voters" according to Huffmon. It was conducted in Alabama, Arkansas, Florida, Georgia, Louisiana, Mississippi, North Carolina, South Carolina, Tennessee, Texas, and Virginia.

"There is a gap between who the activists nationally like and who southerners like, but as the campaign gets underway, we expect that gap to close," says Huffmon.

The Winthrop University poll was conducted by telephone from February 21-27 among 825 adults. It an overall sampling error of plus-or-minus 3.41 percentage points.