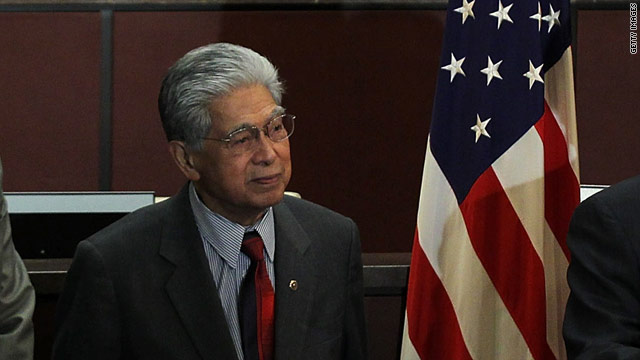 (CNN) – Sen. Daniel Akaka, D-Hawaii, announced Wednesday that he will not run for another term, becoming the fifth Democratic senator to retire this year.

“As many of you can imagine, it was a very difficult decision for me,” Akaka said in a statement. “However, I feel that the end of this Congress is the right time for me to step aside. It has been a great honor and privilege to serve the people of Hawaii.”

“Mr. Akaka,” became a familiar name to those who watch the Senate floor, as he has been called first during roll call for many years. Akaka was first elected to the Senate in 1990, after serving 14 years in the House.

“Danny Akaka answered the call to serve right after high school by joining the Army Corps of Engineers during World War II. When he returned to Honolulu, he continued to serve the people of Hawaii as an educator before embarking on more than three decades of distinguished service in both houses of Congress,” Obama said.

“Michelle and I would like to join the people of Hawaii in saying ‘mahalo’ to Danny for his lifetime of service and offer both him and Millie our best wishes for the future,” he added. "Mahalo" is a Hawaiian word meaning “thank you.”

Democratic and Republican operatives reacted swiftly to Akaka’s announcement, which opens yet another seat currently held by an incumbent Democrat for the 2012 elections. So far this year, Sens. Kent Conrad of North Dakota, Jim Webb of Virginia, Jeff Bingaman of New Mexico, and Independent Sen. Joe Lieberman of Connecticut have announced they will not seek reelection. The retirements further threaten the Democrats’ Senate majority, which is already on shaky ground after the midterm elections last fall.

“With a heavily-leaning Democratic electorate and their native son up for re-election as President of the United States, we are confident the people of Hawaii will continue to have two Democrats serving them in the United States Senate,” Murray said in the statement.

A Democratic source also trumpeted the party’s advantages in Hawaii, pointing out that Obama won his home state by 45 points in 2008, and adding that Democrats hold a 34-point registration advantage.

But Republicans quickly made it clear they consider the newly open seat fair game.
“The retirement of yet another longtime Democrat Senator further expands the map of takeover opportunities and further strengthens Republican hopes for a new Senate majority in 2012,” National Republican Senatorial Committee Communications Director Brian Walsh said in a statement released shortly after news of the retirement broke.

“With several strong candidates already looking at this race, even before Senator Akaka’s announcement, Hawaii presents an unexpected opportunity for Senate Republicans and we intend to make the most of it in 2012,” Walsh said.

Of those strong candidates, many GOP strategists think former Hawaii Gov. Linda Lingle would have the best chance at taking the seat. Lingle may be best known on the national stage for delivering the nominating speech for vice presidential candidate Sarah Palin at 2008 Republican National Convention.