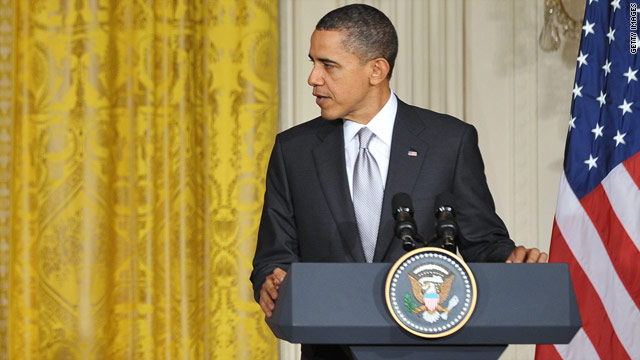 Obama: Gadhafi 'has lost the legitimacy to lead'

We are "sending a clear message: the violence must stop," Obama said.

"The aspirations of the Libyan people ... must be met."

Later in the joint press conference with Mexican President Felipe Calderon, Obama said that the United States is examining a "full range of options" in the Libyan crisis.

I don't "want us to be hamstrung," Obama told reporters. There is a danger of a "bloody stalemate" in Libya, he said, so he wants to be sure America "has the capacity to act quickly in event of humanitarian crisis."

"Col. Gadhafi needs to step down from power and leave," Obama said.

The president also warned that advisers to Gadhafi need to understand that they will be held accountable for any violence they perpetrate against civilians.

"They should know history is moving against Col. Gadhafi," Obama said.

Obama said he has two basic principles in terms of dealing with the broader unreast in the Middle East: do no violence to citizens and stand for freedom and democracy.