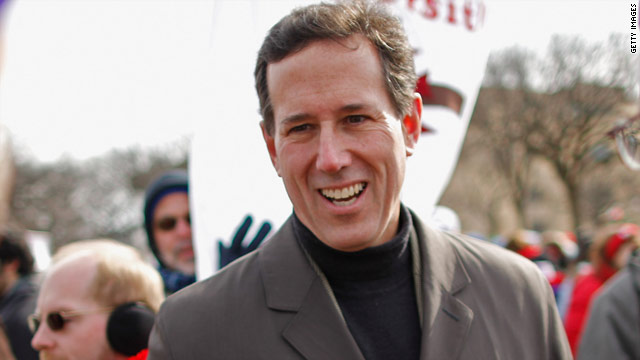 Traveling man picks up the pace

(CNN) - The man who is arguably the most frequent flyer of early stages of the battle for the 2012 Republican presidential nomination is picking up his already frenetic pace.

Within five days next week, former Sen. Rick Santorum of Pennsylvania will visit Iowa, South Carolina and New Hampshire, the three states that traditionally kick off the presidential primary and caucus calendar.

In an e-mail release Wednesday morning, the likely White House hopeful's political action committee, America's Foundation, touted Santorum's travels next week, most of which had already been announced.

On Wednesday, Fox News suspended the contributor contracts of both Santorum and former House Speaker Newt Gingrich, who Thursday is expected to announce his intention to explore running for the White House. Fox News says the contracts will be terminated on May 1 if both men become candidates.

Santorum's first post-Fox News appearance was on CNN. On "John King, USA," he said the move by Fox won't change his timetable on deciding on whether to run for the White House.

"No, it doesn't affect it at all. I look at it as I've been up front about, you know, that I'm looking at this and exploring it and it's not going to," Santorum told King Wednesday night. "It's not going to have any impact on what I'm hearing in Iowa and New Hampshire and South Carolina, you know, how our fund-raisers are going, all the things that when you test the waters you have to test to see how you're doing really are quite separate than media appearances on Fox."

Santorum starts next week in Iowa, which kicks-off the race for the White House. He joins Gingrich, former Minnesota Gov. Tim Pawlenty, and other possible GOP presidential contenders at the Iowa Faith and Freedom Coalition's Spring Kick Off near Des Moines. The organization is one of the state's leading and most influential social conservative groups.

On Tuesday, Santorum does radio interviews in Des Moines and Sioux City and headlines the Crawford County Republican Women Lunch. On Thursday, he's in South Carolina, which traditionally holds the first southern primary. Santorum speaks to a Boy Scout dinner in Easley, S.C. On Friday, he heads to New Hampshire, which holds the first primary along the road to the White House. Santorum headlines the Strafford County Republican committee's annual Lincoln-Reagan dinner.

If Santorum formally jumps into the presidential race, he could face a string of better funded opponents with larger national political operations.

Polls over the past year indicate that Santorum registers in the low single digits nationally among Republican voters when it comes to the choice for their party's next presidential nominee. Still, due in part to his strong opposition to abortion rights, Santorum remains popular with many socially conservative voters who have long had an influential role in the GOP primary process.