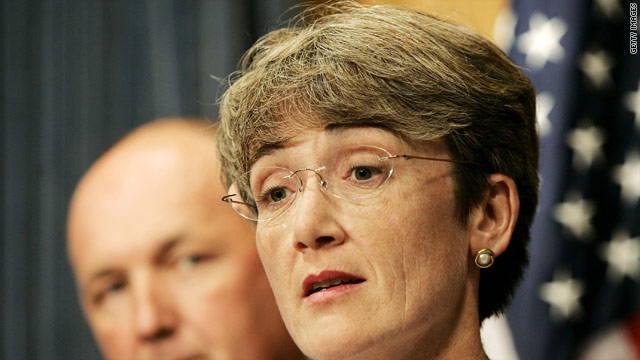 (CNN) - She doesn't announce her candidacy until Monday, but that's not stopping some partisan words from flying over Heather Wilson's bid for the open Senate seat in New Mexico.

A GOP source confirms to CNN that the Republican former five-term congresswoman and former Air Force officer is expected Monday jump into the race for the seat of retiring five-term Democratic Sen. Jeff Bingaman. Her entrance into the contest was first reported by Politico.

"Heather Wilson has been part of the problem in Washington for years. At a time when voters want fresh faces and new energy, she brings to the race a long record of standing-up for the entrenched interests in Washington," says DSCC Communications Director Eric Schultz.

"Heather Wilson's connections to some of Washington's darkest scandals and shadiest figures will be a problem for her in a primary and – if she makes it – in a general election."

CNN reached out to the National Republican Senatorial Committee for a response.

"Heather Wilson is a former Rhodes Scholar, distinguished Air Force Academy graduate and one of the first female Veterans to serve in Congress so it's disturbing to hear these types of smears from Democrats in Washington right out of the gate," NRSC Communications Director Brian Walsh tells CNN. "Whether she or any other Republicans choose to run in this race, let's hope this isn't a sign of just how desperate Democrats are to hold onto this seat."

While the NRSC is coming to Wilson's defense, they say they are not and will not take sides in any potential GOP primary battle for the Senate nomination in New Mexico.

Wilson ran for the Senate in 2008, losing a Republican primary contest to Rep. Steve Pearce, who ended up being defeated in the general election by Democrat Tom Udall, a five term congressman who is now New Mexico's junior senator. Wilson, who is considered more moderate than Pearce, could face off against him again, as Pearce has not ruled out a run for the Senate in 2012. Lt. Gov. John Sanchez is another potential GOP contender.

On the Democrats side, some strategists say that Rep. Martin Heinrich, who represents New Mexico's first congressional district, could be the strongest candidate.

The Democrat's currently have a 53 to 47 majority in the Senate. They are defending 23 seats (21 Democrats and two independents who caucus with the party) next year, with the GOP defending 10 seats.