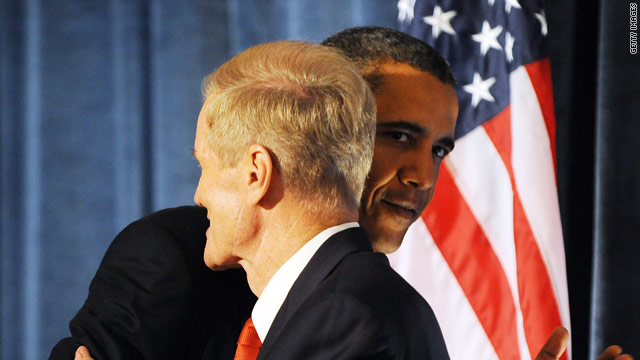 Obama to Florida to help out Nelson

Miami, Florida (CNN) - President Barack Obama teams up with Sen. Bill Nelson of Florida later Friday, to help the state's Democratic senator raise campaign cash for what could be a rough road to re-election next year.

The president, Nelson, and Sen. Patty Murray of Washington, chairwoman of the Democratic Senatorial Campaign Committee, will attend two fundraisers in Miami Beach. The first will be held at the Fountainbleau Resort Hotel and the second at the Miami Beach, Florida home of Judith and Michael Adler, large contributors to Democratic candidates and causes.

A source with knowledge of the events tells CNN that the money raised at the fundraisers will be split between Sen. Nelson's re-election campaign and the DSCC. According to filings with the Federal Election Commission, Nelson had $3,083,493 in cash on hand as of the end of last year.

The two-term Nelson is under the 50 percent mark against possible Republican challengers in five 2012 hypothetical general election matchups, according to a survey from last month commissioned by Ron Sachs Communications and conducted by Mason-Dixon Polling and Research.

And a Quinnipiac University poll conducted in January indicated that 45 percent of Florida voters approved of the job Nelson's doing as senator, with 21 percent disapproving and 34 percent unsure.

Obama won Florida by three percentage points over Sen. John McCain in the 2008 presidential election. But the GOP did very well in the Sunshine state in last November's midterm elections, holding onto the governor's office, an open senate seat, and winning back four House seats controlled by the Democrats. But Nelson could be helped in his re-election bid by having the president at the top of the ticket on the ballot in November 2012.

Earlier in the day the president will attend an education event at Miami's Central High School, along with Secretary of Education Arne Duncan and former Florida Gov. Jeb Bush. The event is part of the Obama administration's push to "out-educate, out-innovate" the global competition.