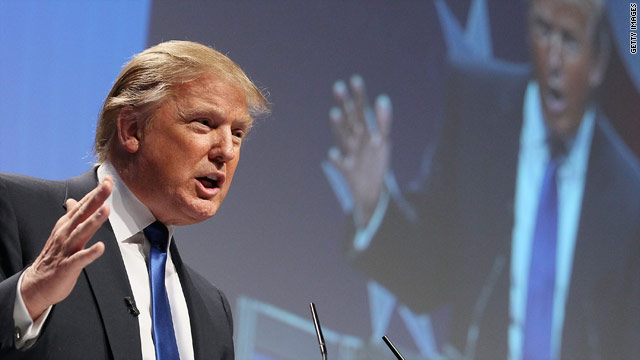 (CNN)-Donald Trump will compete in Iowa, if he decides to run for the Republican presidential nomination.

In an interview Thursday with the "Des Moines Register," Trump indicated that he would campaign aggressively in Iowa for the first-in-the-nation caucus and plans to visit the Hawkeye state soon, though he's still contemplating a formal bid for the White House.

Trump says he's got big goals for Iowa, telling the newspaper, "I will meet many, many people–maybe all of the people. If I decide to run, I will be shaking hands with everybody."

And he is not unaware of criticism that he may face on the campaign trail related to his personal history. The twice-divorced real-estate mogul said "One of the reasons I was divorced is because I worked very hard. And, you know, that's a good reason. But I worked very, very hard building up a great company. And it's a great company."

Trump also addressed hot-button issues in the interview, stating his support of gun rights as well as his opposition to abortion and same-sex marriage, though he admitted that his ideas on gay couples having access to the same benefits as married couples are "not fully formed."

He also sounded off on a favored talking point–U.S. trade with China.

"We don't need to be free trade with a company that's making a $300 billion profit," he said. Referring to other countries who benefit from military security offered by the U.S. he continued, "And nobody pays us. We're like the stupid drunkard that doesn't know what they are doing. So I will start with the fact that all of these countries that are sucking billions of dollars out of our lungs will not be doing that a week after I get into office."

Trump has stated that, should he choose to run, his campaign would be focused on business and foreign affairs. Though he was invited to GOP Rep. Steve King of Iowa's Conservative Principles Conference in Des Moines next month, which will attract other presidential hopefuls, Trump did not commit to attending, an indication of how undecided he may still be regarding a run.

"Ill take a look at that. I'm going to be there very soon," he said.

Donald Trump told CNN's Chief National Correspondent John King that he would not make a decision until June during an interview on "John King, USA" in January.