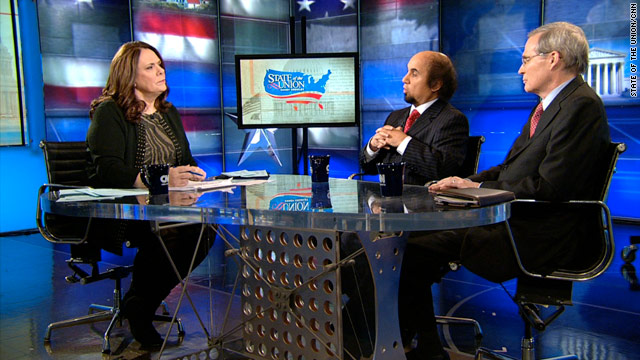 Washington (CNN)-A former national security adviser to George W. Bush, Stephen Hadley, and a former Libyan minister agree that leader Moammar Gadhafi is willing to do anything to stay in power, including killing his own people.

But when pressed on the reason that the Bush administration opened relations with Libya knowing that its leader had an oppressive history, Hadley defended the decision, telling CNN Chief Political Correspondent Candy Crowley that it was "difficult."

In an appearance on CNN's "State of the Union," Hadley said, "What we got for being willing to resume relations with Libya was that he gave up his weapons of mass destruction, his nuclear program, his chemical weapon program. That's all – all that hardware is now in the United States."

"He also provided compensation to the victims of terror. He got out of the terror business," Hadley continued. "It was a difficult decision.

And Ali Errishi, who resigned as Libyan minister of immigration and expatriates two weeks ago, said of Gadhafi, "This is a man who has shown that there's only one choice for Libyan people. Either I rule or I kill you." But he rejected the notion that he worked for Gadhafi, asserting instead that he "worked for the Libyan people."

"We wanted to open our country to the world," he said. "Had we not opened the country a bit, our young people would have had no access to the Internet, to Twitter, to satellite TV."

The influence of technology has been largely credited with inspiring protests against oppressive leaders in the Middle East, including Tunisia and Egypt.

"We sort of put our finger on the pulse of our people, and there was a need for reform," Errishi continued.

He also referred to the United States as a "friend" during the interview, saying "You know, the president or the secretary of state talk about the Libyan people as friends … I mean to have friends, and we're not too proud to ask them for help in times of need."

And Hadley urged the inclusion of Libyans themselves in the transition process saying, "I think one of the things that the Libyan people, like any other people who are in process of freeing themselves, they want to do it themselves."

"People actually want and need to fight and win their own freedom," he said. "But that doesn't mean that we cannot help."