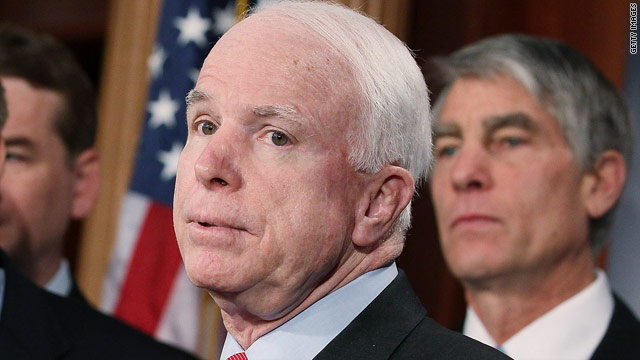 McCain touted free trade agreements during the interview and voiced his agreement with President Obama that "innovation is the key to us being able to restore our economy." And though the designs for the iPad and iPhone are home grown in California, the actual manufacturing takes place overseas, in China.

"I think it's obviously a recognition of the reality and the trends, that cheaper, lower-cost labor products will usually prevail over products made in higher wage and income countries," he said, while commenting the abundance of foreign-made products in the American marketplace.

But when he moved into the territory of goods that are made in America, he ran into trouble. "I would also point out that…an iPad or an iPhone, those are built in the United States of America. And as the president said, continuously, and I agree with him, innovation is the key to us being able to restore our economy."

"And that's got to be exports," he continued. "We've got to have free trade agreements."

Three exports that cannot be factored into McCain's argument are the iPad, iPhone, and iTouch. All are products that are "Designed by Apple in California. Assembled in China," as is printed on the back of each device.

McCain's office tells CNN that "Senator McCain is aware they were designed but not assembled in the U.S."