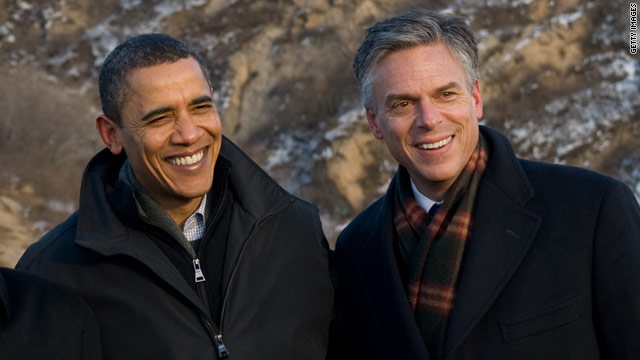 President Barack Obama and Ambassador Jon Huntsman tour the Great Wall of China outside of Beijing in November of 2009.
March 6th, 2011
03:12 PM ET

Washington (CNN) – The White House likes to shower praise on some of the Republican presidential hopefuls looking to take President Barack Obama's job in 2012.

In the end, it is love the would-be candidates could probably do without.

The words really aren't meant to be so kind, of course. They're subtle (and sometimes not so subtle) ways to jab the potential rivals and remind voters of likely weaknesses they may face.

The latest to get kudos from top administration officials is U.S. Ambassador to China Jon Huntsman, still a member of the administration though not for long.

Huntsman has announced he's stepping down at the end of next month, with all signs pointing toward a likely bid for the GOP nomination for president.

If he indeed runs, Huntsman will have to walk a fine line: touting his experience as ambassador, while trying to distance his ties to the Obama administration to avoid opposition from skeptical conservatives.

On the NBC program "Meet the Press," Obama's chief of staff – Bill Daley – gently tried to make that fine line a little tougher to navigate.

Huntsman, he said, has "done an excellent job on behalf of the Obama administration."

It started with a question on whether there was concern over Huntsman potentially maneuvering toward a bid while still serving as ambassador.

Daley responded he knew of no evidence Huntsman had done so, but said it would be inappropriate.

Then Daley made sure everyone knew Huntsman was a loyal member of the administration, noting the topic was likely to come up later on the campaign trail.

Even Obama has teased Huntsman about it, while the ambassador was in the room for a news conference with Chinese President Hu Jintao in January. Not long before Huntsman submitted his resignation, Obama said, "I couldn't be happier with the ambassador's service, and I'm sure he will be very successful in whatever endeavors he chooses in the future."

"And I'm sure that him having worked so well with me will be a great asset in any Republican primary," Obama added.

Another favorite White House subject for praise he could do without is former Massachusetts Gov. Mitt Romney, who has been fending off conservative concern over his Massachusetts health care plan as he prepares to launch his presidential bid.

Some Republican critics compare Romney's plan in Massachusetts to the federal health care reform bill signed into law last year, and the White House to happy to help.

In January, then-White House senior adviser David Axelrod told USA Today of Romney's health care plan, "We got some good ideas from him."

Daley got in a dig of his own in at the Alfalfa Dinner last month, joking about changes since the last time he was in Washington.

"Ten years ago, Obamacare was called Romneycare," he said to laughs.

Then last week, in a moment surely bound for a future television commercial, Obama told the National Governors Association at a White House luncheon that Romney was "right" on his health care plan.

With at least one and maybe more of Romney's rivals for the 2012 GOP nomination sitting in the room, Obama said, "I know that many of you have asked for flexibility for your states under this law. In fact, I agree with Mitt Romney, who recently said he's proud of what he accomplished on health care in Massachusetts and supports giving states the power to determine their own health care solutions."

On Saturday, Romney launched an effort to fend off concerns about his health care plan.

Speaking to a party dinner in Bartlett, New Hampshire, he addressed criticism before the GOP faithful, saying, "Our experiment wasn't perfect; some things worked, some didn't, and some things I'd change."

His real message argued that his health care plan had nothing in common with the Obama version.

"One thing I would never do is usurp the constitutional power of states with a one-size-fits-all federal takeover," Romney said.

Putting as much distance as he can between the plans, Romney made repeated references to the new law, saying, "Obamacare is bad law, constitutionally. It's bad policy, it is bad for America's families, and that's one reason President Obama will be a one-term president."

White House officials say they're not worried yet about who Obama will face next year, with Daley telling "Meet the Press": "We've got enough issues to deal with and not worry about who is going to be the Republican nominee. There will be a nominee at some point and we'll deal with it next year."

For good measure, he reminded us that for "normal people out there in America, the last thing in the world they're thinking about right now is 2012."

Still, softening up the opposition as early as possible never hurts, especially when you can say it masked with a smile.