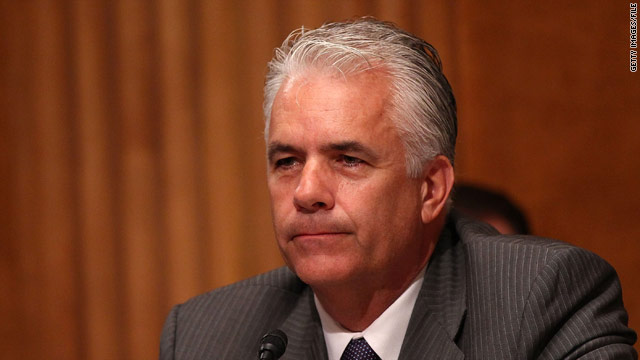 (CNN) - Nevada Republican Sen. John Ensign announced Monday he will not seek reelection in 2012, saying in statement "there are consequences for sin."

"I do not want to put my family, those that I care about, or this state through what would be a very ugly campaign that would ultimately cause a great deal more pain than has already been felt as a result of my actions. For these reasons, I will not seek reelection in 2012," Ensign said during remarks at the Lloyd G. George Federal Courthouse in Las Vegas.

During the speech, the two-term senator made reference to his extramarital affair with Cindy Hampton, his onetime campaign treasurer, which he admitted to last June. She is the wife of Doug Hampton, a former top aide to the senator.

Ensign and his family were longtime friends with the Hamptons. Doug Hampton has given interviews stating his family has received money and employment offers from Ensign after he and his wife left the Senate staff in April 2008. Ensign admitted his parents gave the Hamptons $96,000 but said the money was a gift, not an effort to suppress word of the affair.

"As I have learned through my mistake, there are consequences to sin." Ensign said during his speech on Monday. "When a person is in a leadership role, those consequences can affect a lot of people in a very negative way."

"I know that God has forgiven me, and so has my wife. Darlene and I are doing better than ever and have gotten through this with a stronger marriage for which I am incredibly thankful. I can only hope that someday all those whom I have hurt or disappointed will find it in their hearts to forgive me, as well."

Ensign, who still faces Senate ethics charges resulting from the affair, had over the past few months been touring Nevada, asking voters in his home state for their forgiveness.