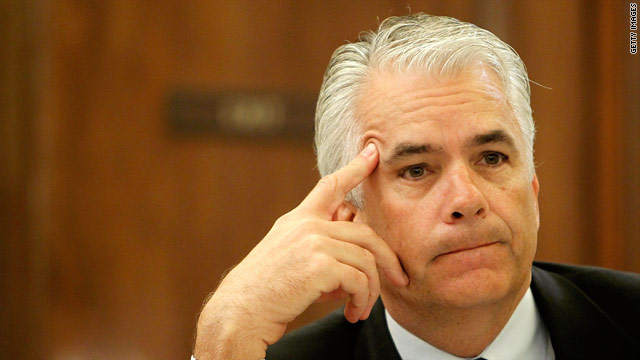 Ensign will not run for re-election

(CNN) - Sen. John Ensign of Nevada will go before cameras in Las Vegas Monday afternoon, to announce that he will not run for re-election next year, two sources tell CNN.

The two term Republican will make a statement at noon local (3 p.m. ET) at the Lloyd G. George Federal Courthouse in Las Vegas.

The one-time rising star in the Republican party admitted last June to an extramarital affair with Cindy Hampton, his onetime campaign treasurer. She is the wife of Doug Hampton, a former top aide to the senator.

Ensign's office announced last December that the senator had been told that he was no longer a target of a federal grand jury investigation into whether he violated the law in an effort to cover up the affair.

Ensign and his family were longtime friends with the Hamptons. Doug Hampton has given interviews stating his family has received money and employment offers from Ensign after he and his wife left the Senate staff in April 2008. Ensign admitted his parents gave the Hamptons $96,000 but said the money was a gift, not an effort to suppress word of the affair.

Ensign, who still faces Senate ethics charges resulting from the affair, had over the past few months been touring Nevada, asking voters in his home state for their forgiveness.

The Democrats currently have a 53 to 47 majority in the Senate. They are defending 23 seats (21 Democrats and two independents who caucus with the party) next year, with the GOP defending 10 seats.